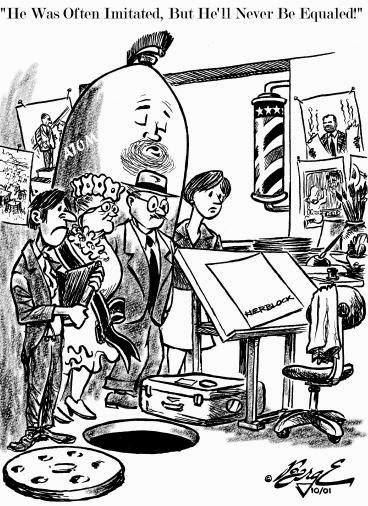 HBO will show a documentary about the 20th Century's greatest editorial cartoonist, Herb Block, on Monday, January 27. I am certainly looking forward to watching it.

My fellow inkslingers assure me that some of them are in fact included in the documentary, which was previewed at the Association of American Editorial Cartoonists convention in Salt Lake City last summer. (I am still kicking myself for skipping that convention, and not just for the chance to visit a city where I can actually find my own cartoons in print.)

I drew the cartoon accompanying this blog post back when Herblock died in 2001. It employs an approximation of Herblock's drawing style and a handful of his recurring characters as well as a prominent reference to a couple of his most famous cartoons.
Posted by Paul Berge at 5:14 PM