Q Toon: Virginia Is for Loving 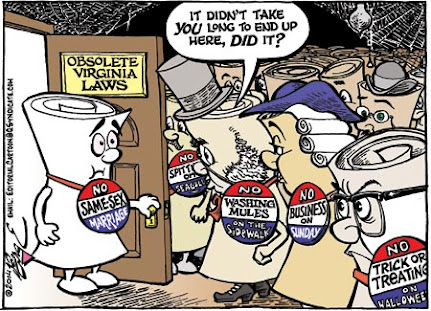 Virginia Attorney General Mark Herring (D) announced last week that his office would ask a federal court to find his states constitutional amendment against same-sex marriage to be a violation of the 14th Amendment of the U.S. Constitution -- a 180̊ turn from his Republican predecessor, jurisprude Ken Cuccinelli.


Mr. Herring cited legal cases in which he said Virginia’s leadership had failed its residents by arguing against school desegregation in Brown v. the Board of Education, interracial marriage in Loving v. Virginia, and women’s admission to the Virginia Military Institute, a state-supported military college, in United States v. Virginia.
“Too many times in our history, our citizens have had to lead the way on civil rights while their leaders stood against them,” Mr. Herring said. “This will not be another instance. It is time for the commonwealth to be on the right side of history and the right side of the law.”

I've overlooked Virginia's laws against mixed-race marriage in this week's cartoon in favor of some sillier laws, even though the parallel with its laws mandating mixed-sex marriage is fairly obvious. My source for the other laws in the cartoon -- apparently still on the books -- is Dumb Laws in Virginia, where you'll find that an anti-bribery law exempts political candidates, it is illegal to hunt on Sunday unless you're after racoons, and the women of Norfolk are required to wear corsets after sundown.
Posted by Paul Berge at 7:56 AM