Q Toon: Boycotting the Gay Away 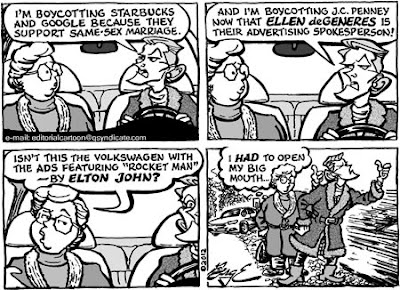 "One Million Moms" has decided to boycott J.C. Penney because they've signed Ellen deGeneres on as their advertising pitchperson:

“Funny that JC Penney thinks hiring an open homosexual spokesperson will help their business when most of their customers are traditional families. More sales will be lost than gained unless they replace their spokesperson quickly. Unless JC Penney decides to be neutral in the culture war then their brand transformation will be unsuccessful.” -- OMM statement


"Does it offend you? Are you offended by this or are you kind of just ‘ho hum, so be it’? There comes a time when there needs to be a holy rejection of corruption that is literally putrefying our families. It’s time, long overdue, and too many people are sitting back and just letting Sodom and Gomorrah come walking in the door.
…
"Does it offend you, when you hear what retailers now—putting icons before you and your kids who are known, and according to some, flaming homosexuals?"

Meanwhile, right wing organizations are also trying to boycott Starbucks because the coffee vendor has come out in support the current bill to legalize marriage equality for same-sex couples in the state of Washington. So have Google and Microsoft; can One Million Moms chuck their PCs and learn to Bing on their Apples? Wait a minute -- Bing is Microsoft! Oh, when oh when will Rupert Murdoch buy up a search engine that will be "fair and balanced" and "neutral in the culture war" as conservatives see it?

And are the wingnuts still boycotting Ford?
Posted by Paul Berge at 10:00 AM