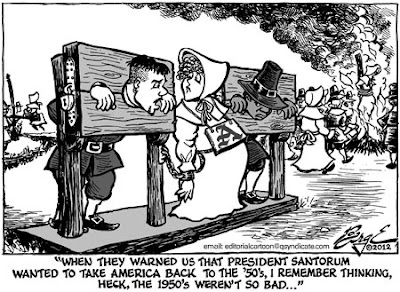 This week's cartoon would have had more oomph if Rick Santorum hadn't managed to fritter away his lead in the Michigan polls with a lousy debate performance and those truly goofy remarks about President Kennedy and the snobbishness of a college education. And then there was his open appeal for Democratic crossover votes; with all the talk in the media about how Romney needed a convincing win in Michigan or it would show how weak his candidacy is, I wonder why I never heard anything about how anything less than an overwhelming Santorum win there would mean that he had only won due to crossover mischief.

You do have to wonder why Santorum thought that criticizing JFK was a good idea. That kind of talk just might sell in the Bible Belt -- maybe -- but a lot of Catholic voters up north still revere the assassinated president. Even if they're rock-ribbed pro-life Republicans today. And saying that college education is for snobs? Even voters who haven't been to college themselves are likely to aspire to sending their children there.

Well, anyway, here's a cartoon about returning America to the 1650's, when everybody lived according to Christian morals whether they liked it or not, and folks didn't send their kids to snobby colleges, and JFK couldn't have been elected president. But I think the guy in the stocks on the right might have a difference of opinion about the 1950's not having been so bad.
Posted by Paul Berge at 8:00 AM