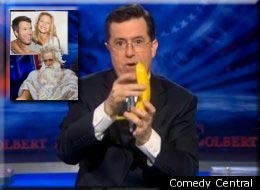 The prime suspect would have to be the segment titled "Contraceptive Crusade," satirizing the dispute between the Obama administration on one side and the Catholic Church and Republicans opposed to "Obamacare" on the other.

Colbert described the Catholic church's stand on sex as being strictly for procreation, involving the sperm from a male husband, the egg from a female wife, and a soul from God in a  "divine and ineffably beautiful three-way." In a joke that somehow got past CBS censors, Colbert further explained Catholic teaching that contraception of any kind is anathema, because, "when you use contraception, you are not only sinning, you're cock-blocking the Almighty!"

Continuing, if you didn't get the joke that Rick Santorum's opinion that the administration's contraceptive insurance mandate puts our rights on a slippery "or lubricated" slope, well you haven't googled the ex-Senator in a long time. But you couldn't have possibly missed the phallic imagery of Colbert sliding a condom over a banana, then standing behind it as, at crotch height, he cut it in half with a miniature guillotine.
Posted by Paul Berge at 11:00 AM