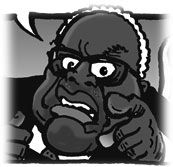 If you've been following my cartoons, you probably knew where I was headed with this week's cartoon already.

So here are a couple of leftover thoughts from this past weekend.

When the Supreme Court decision was announced on Friday, I was some 8½ miles away from my drawing board; but I changed my Facebook cover photo to the cartoon I drew back in May when the draft of Justice Alito's decision was leaked. 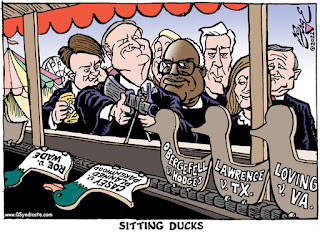 Friends and strangers quickly shared the cartoon — it will be a while before I find our how extensively — while all the other editorial cartoonists were still at their drawing boards coming up with new responses. And friend of the blog Mike Peterson included it in the next morning's Comic Strip of the Day column at Daily Cartoonist.

All appreciated, and many thanks for the support.

And this janitorial note:

I included a cartoon in Saturday's post that had appeared in the Quayle Quarterly. I haven't been able to find out which issue it was in; I know where I used to have the actual magazine in my old apartment, but in 17 years, it is one of many things that has never found a proper home in our current house.

I'll probably find it someday when looking for something else, assuming it wasn't in the box of stuff that got soaked when our basement flooded 16 years ago.