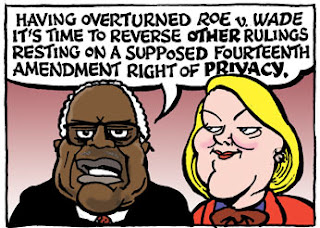 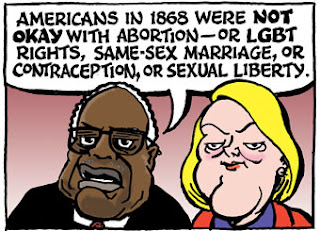 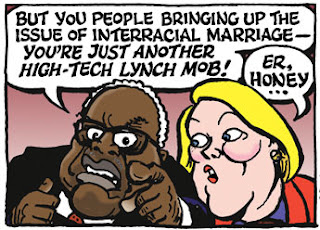 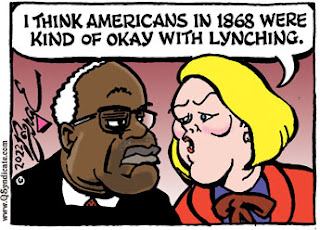 You may have heard that the U.S. Supreme Court completely overturned Roe v. Wade and Casey v. Planned Parenthood last week, thereby turning nearly half a century of women's rights of bodily autonomy over to the politicians in their state capitols.

The majority opinion authored by Justice Samuel Alito promised pinky swear on a stack of Bibles that the Court's decision had no impact on other rulings resting on a constitutional right of privacy earlier Courts had found in the 14th Amendment.

Justice Clarence Thomas, however, wrote a separate concurring opinion declaring that all bets are off.

“In future cases, we should reconsider all of this Court’s substantive due process precedents, including Griswold, Lawrence, and Obergefell,” Thomas wrote on Page 119 of the opinion in Dobbs v. Jackson Women’s Health, also referring to the rulings that legalized [access to contraception,] same-sex relationships and marriage equality, respectively. “Because any substantive due process decision is ‘demonstrably erroneous’ … we have a duty to ‘correct the error’ established in those precedents.”

Thomas added, “After overruling these demonstrably erroneous decisions, the question would remain whether other constitutional provisions guarantee the myriad rights that our substantive due process cases have generated.”

As has been pointed out many, many times this week, Loving v. Virginia was conspicuously absent from Justice Thomas's list of demonstrable errors in need of correction. As cavalier as Thomas is in advocating wholesale annulment of same-sex marriages like mine, he is suspiciously circumspect in regard to resurrecting the anti-miscegenation laws that would break up his own. Anti-miscegenation laws that remained on the books in a majority of states well after ratification of the 14th Amendment — for nearly a century in the case of Thomas's home state, Loving's appellee.

Point made, counselor. Move on.

So, what further constitutional provision errors might Thomas have in mind to correct?

Given that they purport that America's gun violence problem is solely a matter of mental illness, my prediction is: sooner than you think.

Thomas, currently the Court's longest-serving Justice, has been itching from Day One to roll back Americans' rights to 1868 in areas ranging from affirmative action to gun regulation to union rights. And very high on his little list is marriage equality.

Back in 2020, Thomas wrote a dissent in the Court's decision not to hear a case brought by Kim Davis, the county clerk in Kentucky who refused to issue marriage licenses to same-sex couples.

"[T]his petition provides a stark reminder of the consequences of Obergefell. By choosing to privilege a novel constitutional right over the religious liberty interests explicitly protected in the First Amendment, and by doing so undemocratically, the court has created a problem that only it can fix," Thomas wrote. "Until then, Obergefell will continue to have 'ruinous consequences for religious liberty.'"

Joining in and concurring with Justice Thomas? Samuel Anthony Alito.