Or, What To Deflect When You're Expecting. 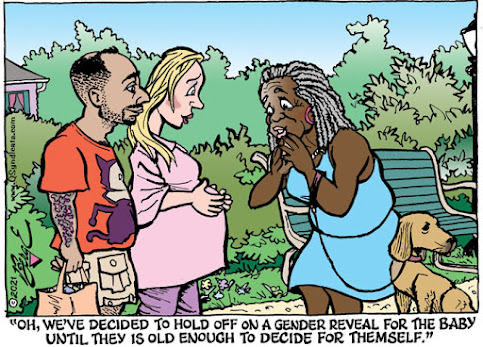 Gender reveal displays for newborns have become increasingly extravagant —and dangerous — as expectant parents seek to outdo every expectant couple that has gone before. Gender reveals have shaken the earth for miles around, or have sparked deadly wildfires and burnt tens of thousands of acres, or have killed guests or the father-to-would-have been.

Which must weigh awfully heavily on those kids as they grow up.

Especially if their birth gender isn't the one they want to stick with.

Imagine the scene: "You can't undergo gender correction surgery! Your father killed himself telling our friends you were a boy!" "We burned down an entire city to tell everyone you're a girl!"

Maybe it's past time to tone down the whole gender reveal game. Maybe even put it off a little while until everyone is on the same page. Just sayin'.