This is one of those weeks when I wish I were one of those cartoonists who didn't care whether the subject of my cartoon bore the slightest resemblance to my caricature of them. 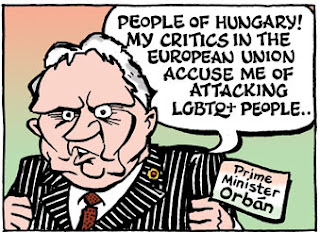 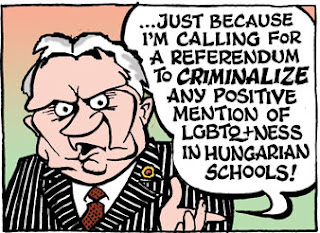 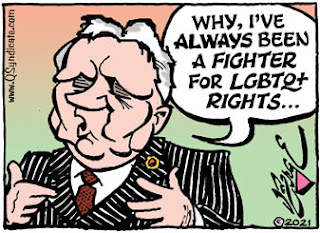 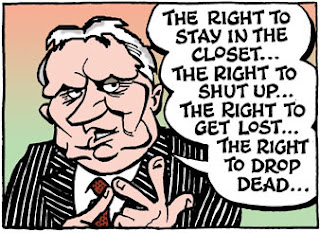 Hungarian Prime Minister Viktor Orbán is an ultra-right-wing politician who came to power in 2010 whipping up fear and anger against Muslim refugees fleeing civil wars in Syria, Sudan, Libya and Afghanistan. His administration has been marked by an assault on press freedoms and dissent, and by unchecked kleptocracy.

Part and parcel of this right-wing package has been enforcement of a conservative brand of Christian "traditional values," primarily by attacking LGBTQ+ rights in every aspect of Hungarian life. The latest move has been a law prohibiting any positive mention of LGBTQ+ orientation or persons in the nation's education system.

Faced with outrage from Western members of the European Union, Orbán has proposed a national referendum to prove that his criminalization of LGBTQ+ discussion in schools enjoys popular support. Arriving at a meeting of his fellow EU leaders last month, Orbán claimed that there was nothing at all antigay about his antigay law.

He even portrayed himself as an LGBTQ+ rights hero:

"I am a fighter for their rights. I am a freedom fighter in the communist regime. Homosexuality was punished and I fought for their freedom and their rights. So I am defending the rights of the homosexual guys, but this law is not about that."

His anticommunist activities in 1989 notwithstanding, in the last two years, his agenda to defend the rights of the homosexual guys has involved rescinding recognition of transgender persons, and censoring LGBTQ+-positive content from television and film.

Orbán last appeared in this blog last December, when Hungarian representative to the European Union Parliament, József Szájer, a founder of Orbán's Fidesz Party, was caught at a gay sex party in Brussels that had too many participants according to Belgian COVID-19 restrictions then in effect. Orbán quickly accepted Szájer's resignation, telling the Hungarian press that "What our fellow member József Szájer has done does not fit into the values of our political community."

I doubt that Orbán's concern for the values of his political community was that there had been too many homosexual guys in that apartment.