Q Toon: Assault in the Wounds 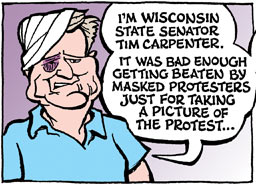 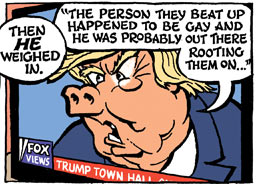 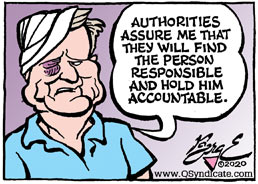 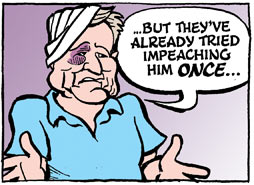 Statues were not the only things laid low during last Tuesday's Black Lives Matter protest in Madison.

Tim Carpenter has represented Milwaukee in the state legislature since 1984. He's a progressive Democrat, openly gay, and from what I've read, reasonably well liked and respected among his peers.

Tuesday night, he started to take a video of the protests when two protesters charged at him, punching him to the ground and began kicking him in the head and ribs. After the assault, he started to walk away but collapsed and was taken to a hospital.

As it happened, Donald Berzelius Trump happened to have a Fox News town hall scheduled in Green Bay two days later, and a member of the audience asked him about the incident. Trump ... well, proceeded to be Trump.

AUDIENCE MEMBER:  Great to have you with us.  My question for you is: With all the unrest we’ve seen across the country, and right here in the state of Wisconsin last night, in our capital city —

AUDIENCE MEMBER:  — a senator was beaten.  Lady Forward was ripped off her pedestal.  We lost some other statues.  What steps is the administration taking to give us back our streets?

THE PRESIDENT:  So, very strong.  You happen to have a Democrat governor right now.  If you would have had Governor Walker, that wouldn’t have happened.

THE PRESIDENT:  Wouldn’t have happened.  (Applause.)  I mean, I’m not saying it.  If Scott were your governor, that would not have happened.  But it did happen, and it was a shame.  And the person they beat up was a Democrat who happened to be gay.  And he was probably out there rooting them on or something, because Democrats think it’s wonderful that they’re destroying our country.  It’s a very sick thing going on.  Nobody has ever seen it.

The rest of his lengthy answer had nothing whatsoever to do with the question, so let's just move on.

"I don't know what's worse, the beating or having someone turn something so personal that happened to you and weaponize it against you," Carpenter told the Milwaukee Journal Sentinel after their reporter relayed Trump's comments.

If you ask me, the beating ought to be worse. When Donald Joffrey Trump trash-talks you, you're in pretty interesting company.
Posted by Paul Berge at 6:02 AM