Here's a bit of cartooning history I hadn't known before.

Earlier this week, I stumbled across a bunch of political cartoons by Chester Gould, better known as the creator of "Dick Tracy." Sure enough, the Lambiek Comiclopedia reports that Gould drew editorial cartoons for the Tulsa Democrat before moving to Illinois to draw for Hearst's Chicago Evening American.
By the time these cartoons appeared in the second half of July, 1920, the Tulsa Democrat had been folded into the Tulsa Tribune, which means that Gould, born in 1900, drew his Democrat cartoons as a teenager. Neither of those two Tulsa newspapers appear to be archived on line (a potential loss to history, given the Tribune's culpability in fomenting the 1921 Tulsa race riots), but I found each of these six cartoons widely disseminated to other Oklahoma newspapers: The Tahlequah Arrow Democrat, the Cimmaron Valley Clipper, the Beaver Democrat, the Wapanucka Press, Renfrew's Review in Alva, the Stigler State Sentinel, the Mountain View Times, the Norman Daily Transcript, and the Apache Week's Review.
All six attack incumbent Senator Thomas P. Gore of Oklahoma, who was challenged for reelection to a third term by Congressman Scott Ferris in the August 3 Democratic primary. The "Rubber Stamp" cartoon refers to a congressional resolution Senator Gore and Representative Atkins Jefferson McLemore of Texas introduced in 1914 in an effort to prevent the United States from being drawn into World War I. It would have banned Americans from traveling on armed merchant vessels or ships with contraband. For the most part, that meant British ships like the Lusitania, sunk by German U-boats one year later. Under pressure from President Woodrow Wilson however, both the House and Senate tabled the Gore-McLemore bill.
Gore, who ran for Congress in Mississippi as a Populist before joining the Democratic party and moving to Oklahoma, was elected to the Senate when Oklahoma became a state in 1907. He was blind, and a grandfather of author Gore Vidal. He was one of the first senators to endorse Woodrow Wilson's run for the presidency, in 1911, and was influential in Wilson's first term; but his strong antiwar stance before World War I and his isolationism afterward estranged him from the second term Wilson administration.

The note "Apol. to Knott" under Gould's signature in "Better Watch Out, Old Timer..." probably refers to John Knott of the Dallas News, who must have drawn a similar cartoon.
Gould's cartoons attack Gore relentlessly for his prewar actions, such as the Senator's opposing military conscription, saying it would create "an army of conscripted slackers." Gore had asked: "Why should we brand the American boy as a conscript without affording him the opportunity to earn the glory of an American volunteer?" In addition to his opposition to the draft, Gore "was one of the earliest and most vigorous sponsors of a constitutional amendment to require a popular referendum on any congressional declaration of war."
By some freakish coincidence, the Ferris campaign's main attack against Gore was also over his antiwar statements and legislation. Both candidates complained loudly that the other was attacking him unfairly, while proclaiming that each himself had treated the other with the utmost respect and civility.
Given that these cartoons each appeared on the front page of so many Oklahoma newspapers in July, and that I haven't come across any Gould cartoons on any other topic, I have to conclude that the synergy between Gould's cartoons and the Ferris campaign is no coincidence at all. Bolstering my conclusion that Gould was working directly for the Ferris campaign is the Week's Review of Apache, Oklahoma: it ran the "Better Watch Out, Old Timer" cartoon atop its front page on July 23, but with the disclaimer "Political Advertising" beneath it. None of the other newspapers — some of which found reason to run Ferris's portrait on page one every day — ran such a disclaimer with any of these cartoons. 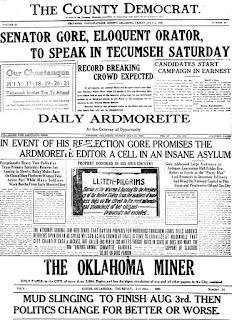 Which is not to say that other newspapers weren't just as brazen in their support of Senator Gore. Newspapers in those days were not the slightest bit shy about trumpeting their political allegiances. You can rest assured that not one of those pro-Gore newspapers ran the Gould cartoons.

Scott Ferris would emerge the victor in the August 3 primary, but then lost to Republican John Harreld in November. Gore won election to the Senate in 1930, but opposed Franklin Roosevelt's New Deal programs and was ousted again in the 1936 primary.
Posted by Paul Berge at 4:01 AM