WisToon: That First Step Is a Doozy 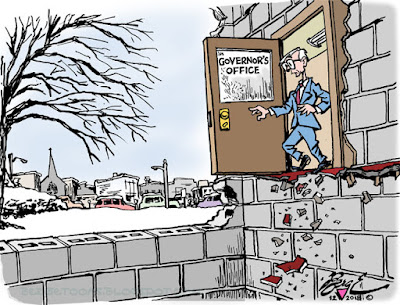 In the wee hours of the morning, Republicans in an extraordinary session of the Wisconsin legislature approved hastily drawn-up bills to curtail the authority of the Democratic Governor-elect and Attorney General-elect. It's a blatant power grab by a legislature determined to safeguard minority rule in the state: Democrats consistently outvote Republicans in legislative races here, but 2011 gerrymandering has guaranteed lopsided Republican majorities in both the Assembly and Senate as well as our congressional delegation.

Assembly leader Robin Vos and Senate leader Scott Fitzgerald and their minions claim that the legislature has been considering these moves for a long time, and they probably have — at least since predictions of a "blue wave" began to cast its shadow over the un-gerrymander-able statewide races. As long as there was a Republican in the governor's office, they were happy to grant  him as much power as he could keep track of. Likewise with the past two Republican Attorneys General, J.B. Van Hollen and Brad Schimel.

But with Democrats due to assume those offices in January, Republicans rushed to make sure the new Governor and A.G. would have no power to shape the Wisconsin Economic Development Corporation (created by the GOP as a replacement for the Commerce Department), 2021 redistricting, or the Republican lawsuit against Obamacare.

Another of the bills they passed will move the state's 2020 presidential primary from April to March, between the nominally non-partisan February primary and April general election. Those bracketing elections will be for such positions as school boards, local sheriffs, and mayors; but most importantly to Republicans in Madison, for the state Supreme Court.

Republicans claim concern that it would be confusing, or unseemly, or gauche to have those non-partisan races on the same ballot as the partisan presidential primary.

Once upon a time, Wisconsin's Supreme Court was filled with respected, non-partisan legal judges; but in the past few decades it has become dominated by partisan stooges bought and paid for by the Wisconsin Manufacturers and Commerce lobby and the Koch brothers. A Scott Walker appointee is up for election to a full ten-year term next spring, and Republicans don't want him to have to run in an election likely to attract lots of Democratic voters eager to have a say in whom their party should nominate for President.

It's not as if the Republicans don't already hold a majority on the state Supreme Court. But with their latest power grab likely to come up before the Court next year, they don't want to take any chances.

Update: Facing unanimous opposition from local election officials, the primary date change didn't pass the legislature after all.
Posted by Paul Berge at 8:27 AM