As promised, I'm rehashing cartoons of George H.W. Bush's political career for Desert Stormback Saturday today. I've posted some of these before, but I've made sure to dig up some previously unrereleased material.

And in case you thought Thursday's memorial cartoon whitewashed the Bush record, it shouldn't surprise anyone familiar with my work to discover that I was not much of a Bush fan in the 1980's. 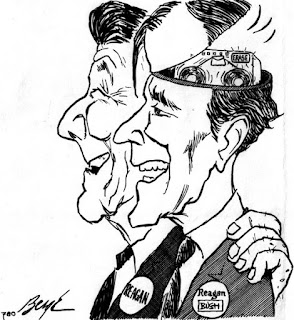 Bush skipped from one government post to another throughout the 1960's and 70's, but most Americans only became acquainted with him when he ran for president in 1980. When he was vying against Ronald Reagan for the 1980 Republican presidential nomination, Bush famously labeled Reagan's promises to cut taxes yet balance the federal budget "voodoo economics." That all changed once Bush accepted the understudy spot on the GOP ticket, however.

For those of you too young to recognize 1980's technology, that's a reel-to-reel tape player hurriedly erasing in Bush's head. They didn't have a big "Erase" light, but one was necessary in the cartoon to show that he wasn't rewinding or fast forwarding. 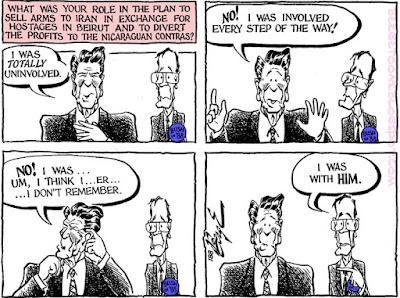 Bush ended up sticking with the post of Vice President for longer than any other job in his career. Skipping ahead to the end of the Reagan administration, I drew this January, 1988 cartoon about Bush's role in Reagan's Iran-Contra scandal. In spite of his wide-ranging foreign policy experience, Bush was never directly connected to the complicated scheme of arms sales, pay-offs and funding of right-wing rebels, involving under-the-table dealings in Iran, Lebanon, Kuwait, and Nicaragua. 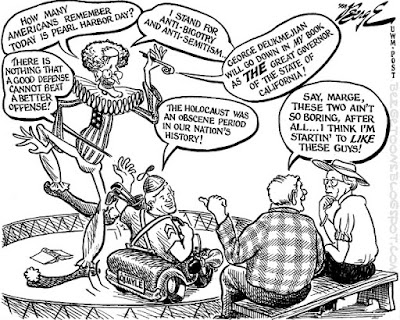 When it came time for Bush to name his own running mate, his choice of boyish Indiana Senator J. Danforth Quayle met with considerable derision. Quayle had a way to go, however, before he would catch up with some of George Bush's gaffes and malapropisms. In a speech to the American Legion on September 7, Bush mistakenly told the audience, "Today is Pearl Harbor Day — 47 years ago from this very day we were hit and hit hard at Pearl Harbor." His praise of the incumbent Governor of California overlooked the résumé of the incumbent President of the United States. 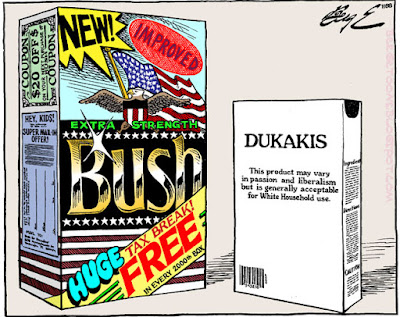 Fortunately for the Bush-Quayle ticket, their Democratic rival was Massachusetts Governor Michael Dukakis, whose drab, wonkish demeanor just wasn't up to the slickly packaged Republican campaign. Dukakis's awkward photo op in an army tank stuck with voters longer than any harmless misstatements by Mr. Bush.

Again, you younger readers will be too young to remember "generic" grocery store products, which were a thing in the 1980's: cheaper versions of name-brand products sold in pointedly plain packaging. The ones where my mother shopped boasted feebly that while they might "vary in quality," they were "generally acceptable for household use." 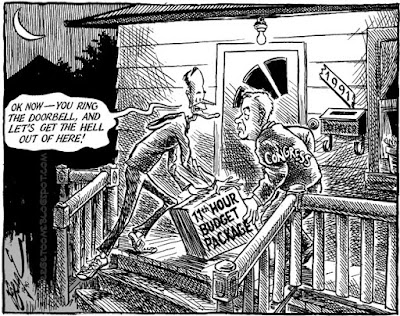 As president, Bush had to deal domestically with a slowing economy. His campaign promise, "Read my lips: No new taxes," soon ran up against political and economic reality and broke. The pledge was the sort of thing that sounded good at the time; he needed to establish some bona fides with the ascendant wing of the party still suspicious that he wasn't sold on "voodoo economics." 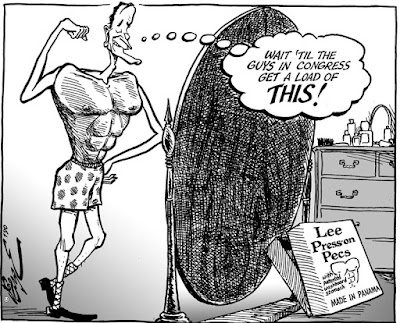 Bush enjoyed greater success on the international front. The break-up of the Soviet Union left the United States as the world's only superpower. Quick and victorious U.S. military intervention in Panama established Bush's reputation as a bold, decisive leader. 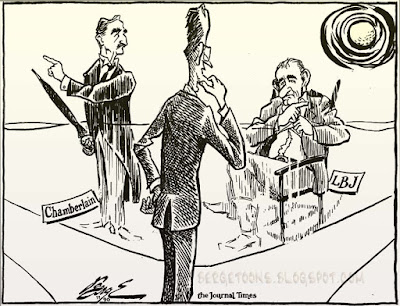 Then Iraq invaded Kuwait, and Bush had to weigh the costs and benefits of going to war against one of the Middle East's most formidable (on paper, anyway) military powers, whose previous malfeasance the Reagan and Bush administrations had overlooked because Iraq served as a check against Iran. (For that matter, the Bush administration had sent conflicting signals about whether it had any interest in Iraqi designs on the emirate.)

Do I have to explain references from the 1930's and 60's to any young whippersnappers out there? I do hope not. 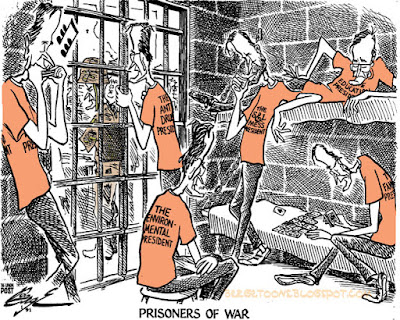 For a time, it appeared that all other issues would take a back seat to the war in Iraq, but as it happened, Iraq's army quickly turned tail and skedaddled out of Kuwait. The Bush administration chose not to press on for the overthrow of Saddam Hussein, even as the Iraqi military turned its attention to foes less able to stand up to it.

Were we going to go back in to stop Saddam from gassing the Kurds? And meanwhile, did some skittishness in the stock markets signal that the economy wasn't recovering from recession after all? 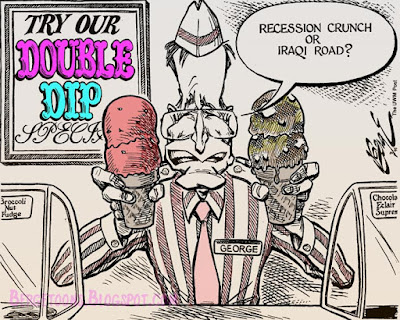 I've run the Double Dip cartoon before because, in spite of the stupid wordplay, it has always been one of my favorites. My husband thought it heartless of me to make it my Facebook ID photo on Sunday morning, but I think that Bush had enough of a sense of humor that he might have gotten a wry chuckle over it.

Now, anyone who thinks that kinder and gentler days prevailed during the administration of Bush père clearly doesn't remember his nomination of Clarence Thomas to succeed Thurgood Marshall on the Supreme Court. Out of some modicum of deference to the memory of President Bush (and because it's not the tone I want to close with), I'm choosing not to rerun my cartoons about that episode. I've run all the good ones before, and you're free to look them up.

I've also decided to skip the cartoons about the 1992 presidential campaign; again, I've dredged up most of the better ones before. Instead, I'll close with this cartoon from December, 1992, as Bush prepared to turn the White House over to a young upstart from Arkansas. 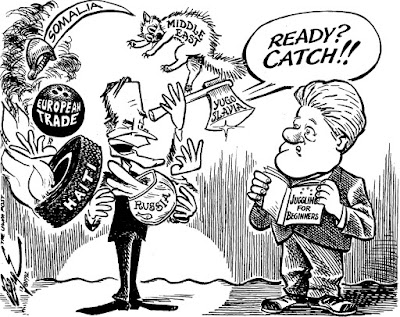