Supralapsarianismback Saturday begs your pardon for wallowing in my juvenalia again this week.

My mother is at the point in life where she has been going through her things to separate out the things she needs from those she no longer does, giving away the stuff she thinks someone else might want, and throwing out the rest. Among the things she has given to me so far is a big folder stuffed with clippings of my cartoons. 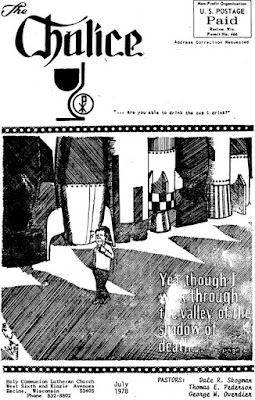 I have the originals of most of them, but there are a few pages of cartoons I had completely forgotten about, drawn for the church where I grew up. I kind of remember drawing the above cartoon for the monthly newsletter — at least I remember the time spent laboriously drawing all those straight lines with a Bic pen and a ruler. (It's hard to see in the scan, but the missile farthest to the left is full of cross-hatched lines.)

The church's copying equipment wasn't kind to all that meticulous shading and thus to the hand-drawn lettering. Some of the voided areas appear to be fingerprints, which, from my subsequent experience with church copiers, I take it to mean that there were a lot of paper jams running that page. 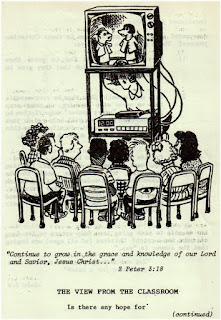 The next two must have been drawn for a fund-raising drive. Obviously, the Sunday School wanted to buy a VCR, although I suppose they could have wanted to enroll the Sunday School teachers at the local technical college to learn how to work the new-fangled things. (I kid.) 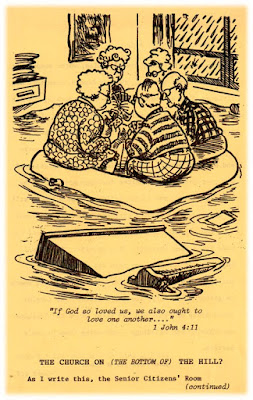 I do remember how the basement room where the senior citizens' group met would flood would flood during a heavy rain. It didn't flood bad enough to float the piano, but it certainly made the room unusable for a week or two. Mom was the coordinator of the group in those days, and she would occasionally enlist my help if she needed a program during a school vacation.

That piano was beyond the point where floating in water could do it any further harm. 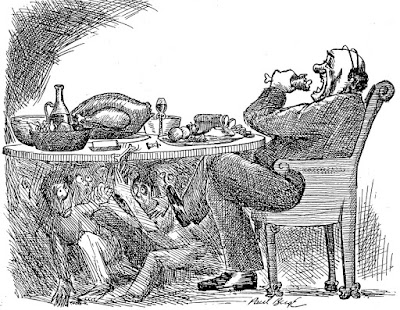 Mom's note on the page with this last clipping identifies it as accompanying Hunger Sunday in 1985. I've abandoned the Bic pen and ruler technique and gone over entirely to shading with a quill pen and india ink by this time. There's an allusion here to the parable of Lazarus and the rich man in Luke 16:


"Now there was a rich man and he was clothed in purple and fine linen, making good cheer in splendour every day. And [there was] a poor man, by name Lazarus, [who] was laid at his gateway full of sores, and desiring to be filled with the crumbs which fell from the table of the rich man .... "(DARBY)