When I found out that in his blog on Wednesday, Mike Peterson was going to display editorial cartoons drawn upon the assassination 50 years ago this week of Rev. Dr. Martin Luther King, Jr., I seriously considered shelving my plans to do the same today.

But I had already begun the project; and really, what topic more deserves a trip in the wayback machine this week?
I'll start with two examples I found in the African-American press. Many of the editorial cartoons in the Afro-American were left unsigned, but this one (and eventually several more in the 1970s and 80s) is signed with the initials "T.S." I believe "T.S" is Ted Shearer, most famous for creating the comic strip Quincy in 1970; Tim Jackson's Pioneering Cartoonists of Color is the only reference I have found to mention specifically his having drawn editorial cartoons. Shearer did draw for the Afro-American before launching Quincy, so until someone tells me otherwise, I'll credit this one to him.

Surely Dr. King's legacy influenced King Features' decision to syndicate Shearer's comic strip centered on Black American children in an un-whitewashed urban setting.
Robert Savon Pious, in addition to drawing for pulp magazines, posters and WPA murals, had an established a career drawing editorial cartoons for the African-American press since the 1930s. His memorial cartoon here attempts to sum up Dr. King's life in images and brief quotations, and one can only imagine how difficult emotionally it must have been for Pious to draw it. (Regrettably, The Indianapolis Recorder cropped this cartoon rather poorly, and there is an unfortunate typo in the cut line.)
So, on to the white guys.

In those first days of April, 1968, editorial cartoonists must have felt inundated by the monumentally important news events cascading one after another. You may have become numb to the barrage of earthshaking news we feel on a minute-by-minute basis every day of the Corrupt Trump Administration in which this morning's lead story is this afternoon's sidebar; but 1968 was before the age of Twitter, or 24-hour news channels propelling the national conversation.
President Johnson had gone on TV on March 31 to announce a halt to U.S. bombing of North Vietnam and also that he would not run for reelection. The first was to bolster peace talks, still foundering on the shape of the negotiating table at that point; the second threw the presidential race wide open. Students across the nation were protesting against racial discrimination and the war; an occupation of  college officials' offices at Bowie State College in Baltimore had just ended. A group of white students at the University of St. Thomas in Houston had organized themselves as a barrier to protect black protesters on college campuses from hostile police. In Congress, Conservative Southern Democrats, Goldwater Republicans, and real estate lobbyists were trying to block the Fair Housing Act. 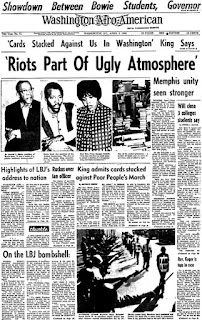 And Rev. Dr. Martin Luther King announced that he would return to Memphis meet with strategists of the Garbage Collectors' strike and business boycott, in spite of violence having broken out while he was there to march in support of the sanitation workers on March 28. People started breaking windows, and in the police response, a 16-year-old was fatally shot and 62 were injured. From the April 2 edition (above) of The Washington Afro-American:


Dr. King, admitting a mistake had been made when he joined the march without having done some intelligence work or brought in staffers to control the violent element declared:
"Riots are here. Riots are part of the ugly atmosphere of our society now."

After King's assassination, riots and looting broke out in several cities across the nation at once, including Washington D.C; Columbia, South Carolina; Baltimore, Maryland; Macon, Georgia; Detroit, Michigan; Minneapolis, Minnesota; and Chicago, Illinois. That Sunday, a white gunman named Norris Edwards burst into a black church in Indianapolis and began firing at parishioners, killing three. Many cities imposed curfews on their citizens, including my hometown. (I was 8 years old at the time, old enough to imagine from media coverage that marauding hordes might come charging over the hill and down my dead end suburban street any minute.)
While some cartoonists' first response after King's assassination was to decry the riots, a more hopeful theme was repeated among others wishing to focus more on Dr. King's legacy.

Since my source for Hugh Haynie's cartoon is a little out of focus, I'll note that the printing on the man's sleeve identifies him as "Dr. King."
From the vantage point of 50 years later, it seems curious that these three white cartoonists would all reference the same poem written by a white woman, yet I could find only two cartoons which quoted Dr. King himself. (Mike Peterson's post includes two others that refer to the "I Have a Dream" speech; but although we have posted a few cartoons in common, I am not copying cartoons from his post.)
As tragic as Dr. King's assassination and the ensuing urban violence were, they succeeded in bringing a sense of urgency to the need for progress in racial justice in the United States that some had refused to acknowledge.
On April 5, President Johnson sent Congress a strongly worded letter (cited in the Jack Knox cartoon above) demanding passage of the Fair Housing Act. Also known as the Civil Rights Act of 1968, it passed on April 10 with provisions making it a federal crime to interfere with anyone's civil rights. Its main aim was to add federal enforcement provisions to the Civil Rights Act of 1866 and to explicitly prohibit discrimination concerning the sale, rental, and financing of housing based on race, national origin, or religion.