Q Toon: The Kids Are Alright

Right-wing gun nuts are finding that their ad hominem attacks against the survivors of the mass shooting at Marjory Stoneman Douglas Parkland High School are just not selling. 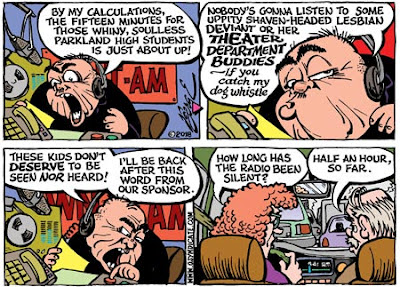 Efforts to claim that one young man, David Hogg, was a "crisis actor" and wasn't really a student from Parkland, based on his family's recent vacation to California, were shown to be laughable: a yearbook screenshot purporting to prove that Hogg had been graduated from a California high school shows the student above him wearing a Stoneman Douglas High School Eagles jersey.

A image of another prominent student photoshopped to make it appear that she was tearing up the U.S. Constitution fooled many eager believers, but a tweet from a Republican candidate in Maine about her backfired badly last month:


A week ago, [Leslie Gibson] was the only declared candidate to represent the 57th District in Maine's House of Representatives. On Friday, his fortunes vastly changed as he quit the race to represent the towns of Greene and Sabattus, according to the Associated Press.
Gibson had become known outside his little corner of Maine for what many say was his rage-tweet against the vocal survivors of the shooting that killed 17 in Parkland, Fla.
"There is nothing about this skinhead lesbian that impresses me and there is nothing that she has to say unless you're a frothing at the mouth moonbat," the now-deleted tweet read.
The 17-year-old girl he was referring to is Emma González, who has emerged as one of the most outspoken activists in the Parkland group.

Last week, Fox squawking head Laura Ingraham had to apologize when advertisers pulled their support of her show over a tweet from her taunting Mr. Hogg for not getting accepted into four of the colleges to which he had applied; she promptly went on vacation. Washed-up rocker Ted Nugent quickly stepped into the breach, calling the students mushy-brained soulless liars. Parkland student Cameron Kasky fired back, tweeting, "If only he saw all the tears. If only he had to look into the eyes I’ve looked into. If only he saw what this did to all of us. And here the NRA is, receiving more fear-based donations than ever. Talk about ‘no soul.’"

The NRA and its minions had likewise savaged the bereaved parents of Sandy Hook; but this time, they're trying to beat a bunch of social media-savvy teenagers who show every sign of being better at this game than any middle-aged or gray-haired troll on the internet, TV, or the campaign trail.

God willing, they'll prove better than the Russian bot army, too.
Posted by Paul Berge at 11:38 AM