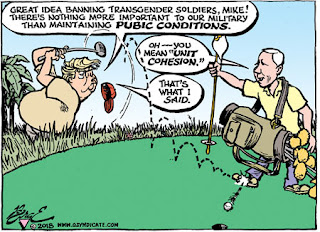 The Corrupt Trump Administration continues its war against transgender individuals who, unlike the President and his new National Security Advisor, volunteer for military service in the defense of their country.


Last Friday night, the administration released two documents detailing Trump's ban on transgender people serving in the military. The first was a memo that stated "transgender persons with a history of diagnosis of gender dysphoria – individuals who the policies state may require substantial medical treatment, including medications and surgery – are disqualified from military service except under certain limited circumstances." The second document, titled, "Department of Defense Report and Recommendations on Military Service by Transgender Persons," contains specific policy recommendations regarding trans individuals serving in the military, but states that the department has concluded "accommodating gender transition could impair unit readiness, undermine unit cohesion, and lead to disproportionate costs." Those are the same arguments opponents gave nearly a decade ago when the military's anti-gay "Don't Ask, Don't Tell" policy was reviewed before it was repealed by Congress.

This policy comes in contradiction to initial recommendations by its own Defense Secretary, Jim "Mad Dog" Mattis and a recent Rand Corporation study:


Previous Integration Efforts and the Experiences of Foreign Militaries Indicate a Minimal Likely Impact on Force Readiness
The limited research on the effects of foreign military policies indicates little or no impact on unit cohesion, operational effectiveness, or readiness. Commanders noted that the policies had benefits for all service members by creating a more inclusive and diverse force.
Policy changes to open more roles to women and to allow gay and lesbian personnel to serve openly in the U.S. military have similarly had no significant effect on unit cohesion, operational effectiveness, or readiness.

It's difficult to see what's behind the Corrupt Trump Administration's determination to push transgender volunteers out of the U.S. military. It doesn't benefit Trump Family Incorporated financially, or bring jobs back to Coal Country. Nor can I imagine that some transgender soldier beat out Don Jr., Eric or Ivanka for a coveted post at Fort Bragg.

But more likely, the force behind the anti-transgender documents comes from Vice President Mike Pence and his cadre of right-wing religious zealots.


According to multiple sources, Vice President Mike Pence played a leading role in the creation of this report, along with Ryan Anderson, an anti-trans activist, and Tony Perkins, head of the Family Research Council, an anti-LGBTQ lobbying group. Mattis actually supports open transgender service, but he was effectively overruled by Pence, and chose not to spend his limited political capital further defending trans troops. In a memo released on Friday, Mattis encouraged Trump to ban transgender people from enlisting in the military, and to discharge those service members who wish to transition. Trump has now formally adopted these suggestions.

So, after being featured in one of my cartoons just last week, Mr. Pence is on track to break last year's record number of Vice Presidential appearances in Berge cartoons. We're at four times so far, and it's only March.
Posted by Paul Berge at 8:24 AM