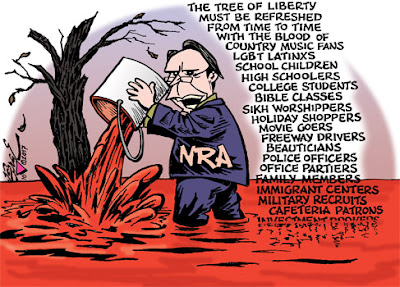 Sunday night, a 64-year-old white male with an arsenal of assault weapons barricaded himself in a 32nd-floor room of the Mandalay Bay Hotel in Las Vegas, broke through a window or two and opened fire on thousands of people attending an open air concert across the street. As of this morning, the death toll stands at 59; 527 others were injured in the shooting and resulting panic.

Congress, out of respect to the dead and maimed, plans to lead the nation in a moment of silencers.

The above cartoon won't show up on the AAEC web site until tomorrow, but I decided to break with my usual practice and post it here today. If I had waited a little longer to draw this cartoon, I could have featured disgraced Fox "News" star Bill O'Reilly instead of NRA Ghoul In Chief Wayne LaPierre:


"[H]aving covered scores of gun-related crimes over the years, I can tell you that government restrictions will not stop psychopaths from harming people.
They will find a way. ....
This is the price of freedom.  Violent nuts are allowed to roam free until they do damage, no matter how threatening they are.
The Second Amendment is clear that Americans have a right to arm themselves for protection.  Even the loons."

"The only thing necessary for the triumph of evil is for good men to do nothing." — Edmund Burke
Posted by Paul Berge at 10:24 AM