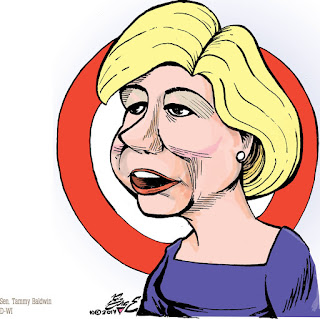 The Koch Brothers are already targeting Wisconsin's Democratic Senator, Tammy Baldwin, up for reelection in 2018.


But 63 percent of Republican voters told the pollster that deficit reduction should take precedence over tax cuts for corporations — and 75 percent said that combating the debt should take priority over cuts that benefit the wealthy. That’s a big problem for Republicans: A recent CBS News poll found that 58 percent of Americans believe that the GOP tax plan favors the wealthy, despite Trump’s vigorous assurances that it does not.
Nevertheless, the Kochs are persisting: On Thursday, the billionaire brothers announced a $1.6 million ad buy in Wisconsin attacking Democratic senator Tammy Baldwin. The 30-second spots are ostensibly geared at pressuring Baldwin to break ranks with her caucus and back Trump’s tax cuts — but, in reality, they are early campaign advertisements for her eventual Republican challenger in 2018.