Monday, I mused that this, my third cartoon of 2017 with Mike Pence in it, could set a record for the most times I have cartooned a Vice President in the first year of his term. Since then, I have checked, and the record in fact stands tied for now. 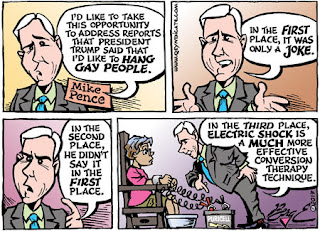 Being nominated to run for Vice President used to be an honor akin to having a post office building named for you: that's nice and all, but everyone is still going to call it "the post office." FDR's first Veep, John Nance Garner, is quoted as having said that the vice presidency was "not worth a bucket of warm piss." Woodrow Wilson's Veep, Thomas Marshall, had a joke about a man with one son who went to sea and drowned and another who was elected vice president; neither son was ever heard from again.

Nowadays, we reserve one of the election debates for the vice presidential candidates, but other than pundits, cartoonists and members of the nominees' families, nobody really pays any attention to them. If any memorable lines come out of the running mate debates — e.g. Lloyd Bentsen's "You're no Jack Kennedy" or James Stockdale's "What am I doing here?" — the comments nearly always come from November's losing ticket, so the candidates are better off being forgettable. (Quick: who debated opposite Mike Pence last year? No fair googling the answer!)

Presidential nominees usually select their running mates with November in mind, not the next four years, or the possibility of accession to the presidency. Veep candidates are often picked to provide geographical or ideological balance to a ticket; Kennedy-Johnson is an example.

Richard Nixon introduced a new twist to the calculus of selecting a running mate with his choice of Spiro Agnew: once they were elected, Democrats couldn't get rid of Nixon without ending up with someone they considered worse. (He just didn't count on Agnew having to resign first.)

Donald Berzilius Trump's strategy last year used both the Kennedy-Johnson calculus and the Nixon-Agnew calculus. Pence has the bona fides with the party's Christian Right that Trump lacks, which cemented their support for the ticket and this administration. Meanwhile, liberals stomping their feet that Trump must be impeached have been cautioned that in many ways, having Mike Pence as president would be worse.

It certainly looks that way from an LGBTQ perspective. Trump admitted as much with his reported remark that when it comes to gay rights, “Don’t ask that guy—he wants to hang them all!”

The New Yorker article which recounts that Trump comment also discusses an antigay bill Pence signed as Governor of Indiana:


In the spring of 2015, Pence signed a bill called the Religious Freedom Restoration Act, which he presented as innocuous. ... But then a photograph of the closed signing session surfaced. It showed Pence surrounded by monks and nuns, along with three of the most virulently anti-gay activists in the state. The image went viral. Indiana residents began examining the law more closely, and discovered that it essentially legalized discrimination against homosexuals by businesses in the state. ...
The outcry over the Religious Freedom Restoration Act was enormous. Gay-rights groups condemned the bill and urged boycotts of the state. Pete Buttigieg, the young gay mayor of South Bend, who is a rising figure in the Democratic Party, told me that he tried to talk to Pence about the legislation, which he felt would cause major economic damage to Indiana. “But he got this look in his eye,” Buttigieg recalled. “He just inhabits a different reality. It’s very difficult for him to lay aside the social agenda. He’s a zealot.”

While the article does say that Pence was not the force behind the passage of the bill in the legislature, his record is littered with antigay zealotry. As head of the Indiana Policy Review in the 1990's, he advised employers not to hire gays and lesbians, writing,


“Homosexuals are not as a group able-bodied. They are known to carry extremely high rates of disease brought on because of the nature of their sexual practices and the promiscuity which is a hallmark of their lifestyle.”

In Congress, he groused when the Matthew Shepard and James Byrd Jr. Hate Crimes bill was signed into law in 2009, complaining that it advanced a “radical social agenda” and would have “a chilling effect on religious expression, from the pulpits, in our temples, in our mosques and in our churches.” He was against the Employment Non-Discrimination Act (ENDA) on the grounds that "Either the employer has to ban employees from having a Bible at the workplace for their break time, or displaying Bible verses, and thereby face a lawsuit under title VII for religious discrimination, or the employer then has to continue to allow it and face a potential lawsuit under ENDA by the homosexual employee."

Pence voted against the repeal of "Don't Ask, Don't Tell," arguing the shibboleth that repeal would damage military readiness and recruitment. He co-sponsored the Federal Marriage Amendment, which would have enshrined denial of marriage equality for same-sex couples into the U.S. Constitution.

Finally, the issues page from Pence's 2000 campaign web site demanded "an audit to ensure that federal dollars were no longer being given to organizations that celebrate and encourage the types of behaviors that facilitate the spreading of the HIV virus. Resources should be directed toward those institutions which provide assistance to those seeking to change their sexual behavior."

That passage is a dog-whistle to advocate spending federal money on "conversion therapy," the widely discredited practice of using psychological torture techniques to reprogram LGBTQ patients into believing they are straight and cisgender. Pence's spokespeople now deny that he was talking about conversion therapy — I suppose one could argue that he was calling for resources to be spent on institutions which convince LGBTQ persons to settle for a life of celibacy — but that's a distinction without much difference.