100 Years Ago: The Punitive Expedition 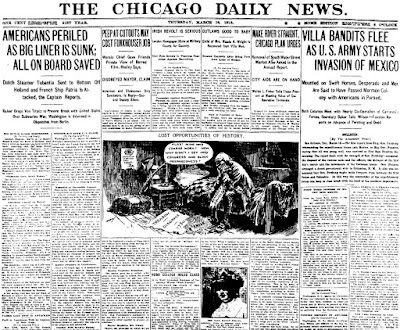 Judging from the date on this March 16, 1916 front page of the Chicago Daily News, Salsaback Saturday last week was focused on the wrong World War.

But let's overlook for a moment the sinking of the Dutch steamer Tubantia and even the front page editorial cartoon by Luther Bradley of Benedict Arnold bemoaning his lost opportunity of getting into Congress to block preparedness. We'll get back to WWI in a minute.

100 years ago this month, the U.S. Army chased Pancho Villa (José Doroteo Arango Arámbula) into Mexico. Villa, who had earlier received some support from the American government in his country's on-going civil war, had led guerrilla raids against American interests since January in hopes of undermining the government of Mexico's provisional President Venustiano Carranza. In the early morning of March 9, Villa and his force of 500 men  attacked Columbus, New Mexico, killing 18 people (ten civilians and eight soldiers) and setting fire to the town.

Villa's guerrillas were driven out of the town by the superior weaponry of the 13th U.S. Cavalry. On March 13, Carranza’s government agreed to recognize the American right to “hot pursuit,” giving U.S. President Wilson the green light to send 6,000 men under the command of General John “Black Jack” Pershing after Villa.

Uncle Sam: "I've Had About Enough of This"

Gen. Pershing's "Punitive Expedition" into Mexico would last until the following February, but was wearing out its welcome by April. This next cartoon by the Australian cartoonist David Henry Souter for the Stock Journal noting three headlines ("Mexico Has Declared War on the United States," "All Americans Have Been Ordered to Leave Mexico," and "The Fighting Has Begun and Americans Killed") dates from June, 1916: 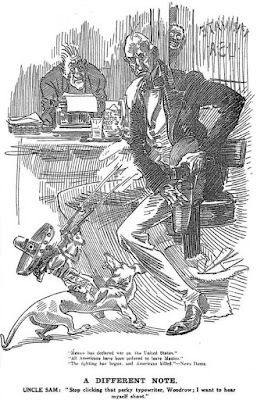 The cartoon refers to the many letters of protest the U.S. President had sent the German Kaiser to protest attacks on Atlantic shipping. The cartoon also seems to predict the German Foreign Ministry's invitation for Mexico to join the Central Powers were the U.S. to join the allies (the Zimmerman telegram was decoded in January, 1917); it looks to me that Pancho Villa is riding a dachshund.

Contrary to the above cartoon, Mexico did not actually declare war on the United States, although the Mexican Army did attack the 13th Cavalry at Parral, Chihuahua, on April 12, and the Mexican and U.S. Armies fought a serious but indecisive battle at Carrizal, Chihuahua, on June 21. Negotiations between the two countries brought them back from the brink of war; and Pershing and his soldiers were withdrawn to the U.S. in time to head for the war in Europe.

The U.S. never did capture Villa, even though the Army tried yet again after WWI.

"Breaking In Again."
Teddy Roosevelt: "This is no place for me!"
Posted by Paul Berge at 7:30 AM