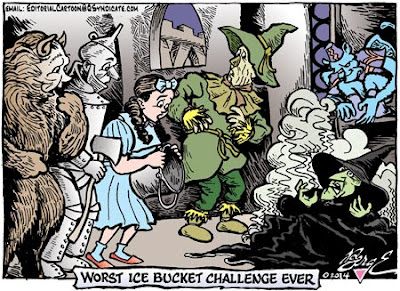 Between the time I drew this cartoon and it had a chance to appear in print, somebody turned the idea into an internet meme featuring any female bête noire. Randy Bish went for the same idea, too. I have to assert that I like my execution of it better. I may be somewhat biased.

Daryl Cagle calls this phenomenon of one idea striking multiple cartoonists a "yahtzee," and the only reason more cartoonists haven't drawn this cartoon this week is that there happens to be so much more to be outraged about right now. If this had been your typical no-news August, there would have been more of these.

The MGM version of "The Wizard of Oz" turned 75 on Sunday, and has been a source of ideas for just about every editorial cartoonist who grew up with the movie -- drawing politicians lamenting "if I only had a brain" (or courage, or a heart) or depicting some wicked so-and-so sending out flying monkeys or drawing "Surrender (fill in the blank)" in the sky, or being exposed as Toto pulls back the Wizard's curtain. It's also the go-to reference for any cartoon having anything to do with the state of Kansas. Or not being there any more.

Dick Locher hit the bulls-eye with a February, 1979 cartoon depicting President Jimmy Carter being scolded by Dorothy for being a very bad man for not fulfilling his promises, and responding despondently, "I'm not a very bad man, I'm just a very bad Wizard!" It was such a good cartoon that Locher has drawn it again and again. Well, it's firmly his idea now, so nobody else gets to draw it.

This is at least the third time I've drawn from the Wizard of Oz inkwell. It's a cultural reference everyone can understand; and since I hardly ever get out to see new movies, I'm left to draw about old ones.
Posted by Paul Berge at 8:35 AM