Air Travel in the Postwar World

A United Airlines flight from Newark to Denver was diverted to Chicago this week in order to eject a pair of passengers who got into a fight over the two inches of space that are the difference between sitting upright and "reclining."

From the Associated Press story:


"The source of the problem: a Knee Defender, the $26.30 device that clamps onto an airline tray table, preventing the passenger in front of you from reclining their seat. ... On Monday's Flight 1462, the woman seated in front took offence and the man behind refused to remove the device, even when asked to do so by cabin crew. That's when she threw a cup of water in his face."

One school of thought says (from the same story),


"When you pay to ride in a plane, you're paying to use the seat - and if that means the seat reclines, well bad luck for the person behind. Of course, we should all be reasonable and, if the passenger behind asks nicely, most folk will put their seats forward. Nobody hops on to a plane planning to be an a**hole. Except maybe him."

On the other hand,


"Just when you’ve resigned yourself to the tiny bit of air space you’ve been allotted for a trip that will take hours, the person in front of you blithely flips back the seat and takes away another six to eight inches. Just try to get out of your seat and go to the restroom now.... Why do people push their seat back when they know it’s going to inconvenience the person behind them? Can’t we appeal to everyone’s better nature and say, for the good of all, that it would be better if we didn’t do that?"

Which brings me to A Bird's Eye View of the Postwar World," a 1945 collection of cartoons and short humor pieces about what people expected life to be like when World War II came to an end. (Consolidated Book Publishers, 153 N. Michigan Ave., Chicago.) I have a tattered copy of this paperback that originally belonged to one of my parents or grandparents. And by "paperback," I mean that even the cover is newsprint.

Here's an example of what people 70 years ago thought air travel was going to be like: 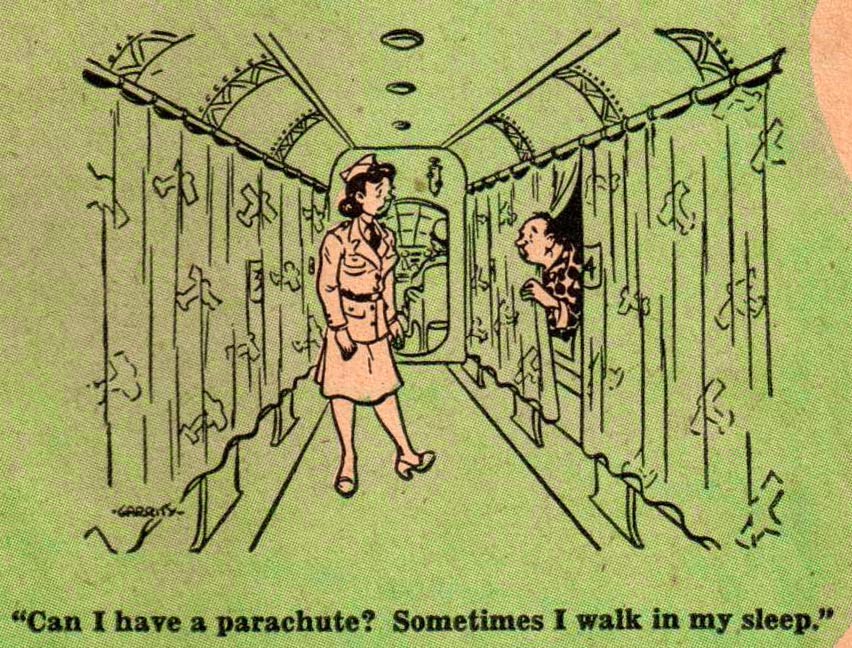 So that's what's in front of the curtain screening first class passengers from the rest of us in steerage.
Posted by Paul Berge at 10:23 PM