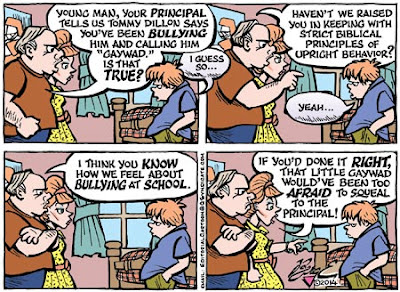 It's Back To School time at Bergetoons Central!

From my vantage point as someone who remembers being bullied a couple of times in junior high school, anti-bullying policies in America's schools seem like a no-brainer. Kids have to go to school; they shouldn't have to put up with physical and mental abuse while they are there.

And yet, some people who call themselves Christians strongly disagree.


In Arizona, legislators had their anti-bullying bill teed up for passage in March [2012]. But then, Cathi Herrod, chief of a lobbying group associated with Focus on the Family, decided that the bill was really part of an effort to "force cultural acceptance and affirmation of homosexual lifestyles". Although the bill doesn't refer specifically to any one victimized group, Herrod successfully pressured lawmakers into rejecting it. Senate minority leader David Schapira, a sponsor of his Senate Bill 1462, called her a "legislative terrorist." "Cathi Herrod, an unelected lobbyist, killed a bill that would protect all Arizona kids purely because of her intolerance of gay kids," he said.
In Michigan [in 2011], the "anti-anti-bullying" lobby went on the offensive with some legislation of their own. In a bill dealing with the bullying issue, they inserted a provision that would have exempted bullies who acted out of "a sincerely held religious belief or moral conviction". With an irony that seems more than usually cruel, the bill was named for a Michigan teen who had committed suicide after years of bullying.

Michigan ultimately cut the "Who Would Jesus Bully" exemption from its bill, but Christian groups continue to push other states to include it in theirs.

Senator Al Franken (D-MN) and Congressman Jared Polis (D-CO) introduced the Student Non-Discrimination Act in the 111th Congress only to have it die in committee They have brought the bill back for consideration in the current Congress, but it appears doomed to the same fate.


"When [Jennings] founded GLSEN, his idea of a safe school was one that pushed a radical homosexual agenda by even encouraging first and second-graders to engage in homosexual activity. So I think that's the impetus behind this bill. We have an administration that wants to push a radical social agenda."

To see what Safe Schools laws may be in effect in your state, see the Family Equality map.
Posted by Paul Berge at 8:14 AM