Q Toons: There's Something About Liz 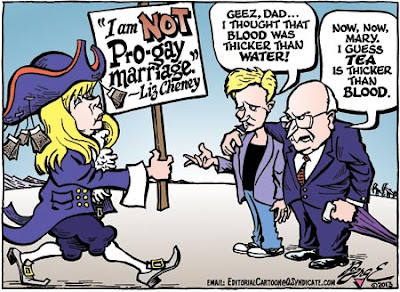 Longtime Virginia resident Liz Cheney, conservative talking head and elder daughter of Dubya's Vice President, has returned to her childhood home of Wyoming to run for the Republican nomination to the U.S. Senate race in 2014 (that nomination being the de facto general election, it being Wyoming.)

She's taking on sitting Republican Senator Mike Enzi by running to the right of the solidly conservative Senator -- he garnered a 96% voting rating from the American Conservative Union in 2012. She's doing her best to appeal to the teahadist, theocratic dittoheads who have been agitating to return the U.S. to frontier values, just like in Deadwood and The Outlaw Josey Wales.

Enzi's supporters have tried to undercut Cheney's appeal to theocrats by suggesting that she might support marriage equality, insofar as Cheney's sister, Mary, married her longtime partner, Heather Poe, last year, and the two are the parents of Liz's two nieces, aged 2 and 6. Liz responded by telling the world that she doesn't believe in Mary and Heather's marriage.


“I am strongly pro-life and I am not pro-gay marriage,” Cheney said in a statement released by her campaign. “I believe the issue of marriage must be decided by the states, and by the people in the states, not by judges and not even by legislators, but by the people themselves.”

We are told that the Cheney's are a close-knit family, but they have had such a difficult time accepting Mary's family publicly that she must be used to it by now. When Mary and Heather were expecting their first child, Vice President Dick got testy with reporters asking him about it. My cartoon about that made it into the Los Angeles Times:


Dick Cheney -- and his different-sex wife, Lynne -- had also gotten testy when Democratic Vice Presidential Candidate John Edwards attempted to goad him into supporting or rejecting Mary in a 2004 televised debate... 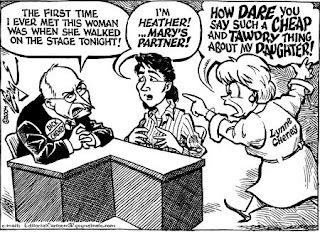 Now that Dick Cheney is safely out of the Vice Presidency, he has been more publicly supportive of Mary and her family. But, presumably, he is no longer interested in running for elective office, and doesn't have to pander to that influential Republican constituency that has been devoted to devaluing, demeaning and destroying families such as the Poe-Cheneys for more than a generation.

I'd like to think that the Focus on the Family Tea Party Birther nativist English-only God-Guns-and-GOP folks are not all as nasty, mean and vile as the ones that dominate Fox News, AM radio, TP rallies, and internet comment sections -- that among them are some who are not completely heartless misanthropes.

But perhaps Liz Cheney knows them better than I do.
Posted by Paul Berge at 11:07 AM