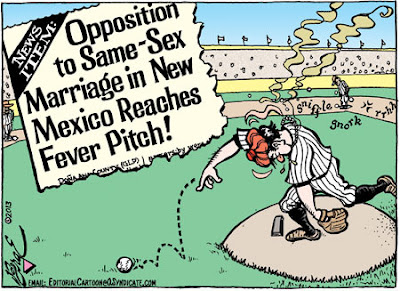 My "News Item" is, shall we say, somewhat misleading.

This week's cartoon is occasioned by this ABC News report, that there has been little opposition to the spread of marriage equality ever since Doña Ana County Clerk Lynn Ellins began granting marriage licenses to same-sex couples in August.


The only crowds that gathered outside his Dona Ana County office were gay couples wanting to marry. The state's top politicians stayed neutral. New Mexico's three Catholic bishops said it was a matter for lawmakers. And an evangelical mega-church in the state's largest city was mum.
"I have gotten some fairly nasty religious-related telephone message," Ellins said. "But generally speaking, I am surprised by the relatively muted response from those who clearly disagree."

The change was prompted by an ACLU lawsuit. Six of the state's most populous counties now recognize same-sex marriages. The New Mexico Supreme Court is scheduled to weigh in on the matter next month.


~~~
Postscript: There appears to be some problem with the AAEC site today -- at least in my browser. If there is no cartoon showing at the top of this page, you can find my cartoon here, on the Michigan Pridesource page.
Posted by Paul Berge at 7:45 AM