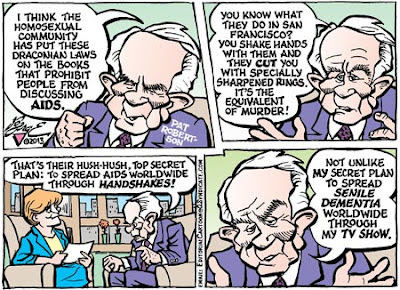 Bless Pat Robertson's little heart for gift wrapping such a tempting cartoon topic for me in time for me to get it drawn before the Labor Day (and Harley Davidson anniversary) holiday weekend!

With everything else going on in the world, you could easily have missed the story -- indeed, Pat Robertson's people have done everything they could to hide it: the exchange was immediately removed from Christian Broadcasting Company's on-line copy of the 700 Club program, and his lawyers exercised CBN's copyright protections against whoever posted the sermonette on YouTube.

But the footage survives on the Huffington Post -- I guess even Pat Robertson's lawyers can't take on Arianna Huffington.

In the first two panels of this cartoon, I've quoted Mr. Robertson as closely as I can in the space I have to work with. Responding to a caller who had been giving a parishioner rides between his nursing home and his church and then discovered that the man had AIDS, here's what Robertson actually said:


“There are laws now, I think the homosexual community has put these draconian laws on the books that prohibit people from discussing this particular affliction. You can tell somebody you had a heart attack, you can tell them they've got high blood pressure, but you can’t tell anybody you've got AIDS...
"You know what they do in San Francisco. Some in the gay community there, they want to get people, so if they got the stuff they’ll have a ring, you shake hands, and the ring’s got a little thing where you cut your finger. Really. It’s that kind of vicious stuff, which would be the equivalent of murder."

According to the "apology" posted by Robertson's lawyers, here's what the second portion of that bizarre statement referred to:


"In my own experience, our organization sponsored a meeting years ago in San Francisco where trained security officers warned me about shaking hands because, in those days, certain AIDS-infected activists were deliberately trying to infect people like me by virtue of rings which would cut fingers and transfer blood."

Recalling the days when police departments rushed to supply their officers with latex gloves to reduce their exposure to HIV-positive bodily fluids, one can imagine, I suppose, that "trained security officers" might have warned Mr. Robertson against all manner of dangers from ACT-UP, from blow-darts to retrovirus-tipped umbrellas to exploding remote-controlled toy cars.

As far as the "draconian laws" that prohibit anyone from talking about AIDS, the only such laws I can think of were crafted by the folks on Robertson's side of the cultural divide, who claimed to be protecting children from exposure to so-called alternative lifestyle choices. (You know, just like the Russians are doing now.) I don't recall any AIDS activists holding up Ronald Reagan's silence on AIDS as a model for the nation.
Posted by Paul Berge at 11:23 AM