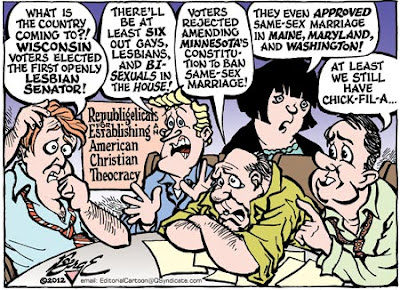 2012 will go down in history as the first year that voters approved marriage equality.

I went somewhat out on a limb by including Sinema in that list when I drew the cartoon on Sunday night. That race wasn't called in her favor until Tuesday. She will be the first openly bisexual member of Congress, and possibly its second out atheist.

And I'm particularly proud that my home state elected Tammy Baldwin to the U.S. Senate. I'll admit that I occasionally had some doubts that Wisconsin would elect as Senator one of the most liberal members of the House (and I was not alone here) after making such a sharp turn to the right in 2010 and 2011. But, the unrelieved nastiness from all advertising comers in the fall notwithstanding, she did a great job of introducing herself to the voters while Tommy Thompson and his Republican rivals were busy attacking each other in the spring and summer.


÷ ÷ ÷
Regarding Saturday's blog entry about in the Strand Magazine, I've been trying to find the next article in Arthur Lord's series on American editorial cartoonists in 1902, so far without success. In fact, I have been unable to find Mr. Lord's article in Google's on-line digitization of the October, 1902 edition of Strand Magazine in which it is supposed to have appeared.

What Mr. Gus Frederick says on his Homer Davenport site is: "Through Ebay, I recently obtained a selection of nine original pages from the October, 1902 number of The Strand Magazine from London. This was an article entitled The American Cartoonist and His Work by Arthur Lord and featured short bios and examples of four 'famous' cartoonists of the day."

Mr. Frederick posted an Optical Character Recognition rendition of the text and illustrations rather than images of those nine pages, so we can't confirm that they have "The Strand Magazine" in the top margin of alternate pages, as the magazine would have had. I have so far found no reference to anyone in the U.S. or Canada having started up a "Strand Magazine" stateside, or that there was a separate North American edition of the London publication. (Perhaps in London, Ontario?)

One reason I suspect that the publication is American is the lack of any British condescension toward the New World cartoonists or the U.S. press. When Ohio Senator Mark Hanna is first mentioned in the article, it is by his last name alone, indicating that the author expected all of his readers to know who "Hanna" was. It's a reasonable assumption that American readers would recognize "Hanna" as the Karl Rove of William McKinley's presidency, but would British readers?

Mr. Frederick notes the British spellings -- "draughtsman," rather than "draftsman"; "abhour" instead of "abhor" -- and florid language of the article, but that doesn't guarantee that the pages were published in London. "American" spelling was not universally accepted in in this country in 1902. American spelling dates back at least as far as Noah Webster's 1828 Dictionary, but there were resistance and ridicule when Teddy Roosevelt proposed making "simplified spelling" official in 1906.

My first thought was that the pages might be from another publication. I thought of Public Opinion, which was fond of printing editorial cartoons; but it was published weekly, not monthly, and doesn't appear to have attached bylines to its feature articles. It seems unlikely that Puck would have profiled a cartoonist from the competing Harper's Weekly while ignoring its own remarkable cartoonists. Harper's Weekly, of course, was published weekly; and, like any other magazine of its day, put its own name on the top of every page.