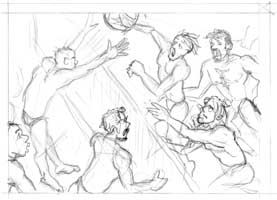 Having seen memes and cartoons on the topic, I was all set last week to draw a cartoon about the International Olympic Committee punishing some country's women's beach volleyball team for wearing shorts instead of bikini bottoms.

But when I tried to find news reporting so I would know which nation's Olympic team had run afoul of the IOC, I eventually found that the incident had nothing to do with the Olympics at all. Or, for that matter, volleyball. It was the European Handball Association that fined the Norwegian Women's Beach Handball team $1,764.

Some commentator authoritatively opined that the bikini bottoms regulation wasn't some sexist relic, but had something to do with sand getting underneath shorts. Seems to me that sand can get underneath bikini bottoms, too, and would be that much more irritating closer to sensitive areas of the skin. 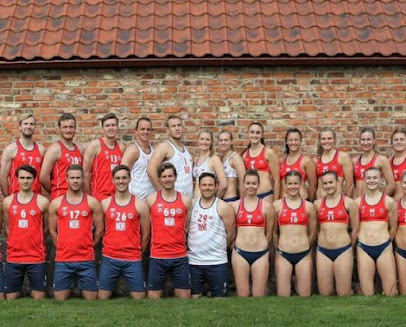 Besides, wouldn't the men want the same advantages women are supposedly getting from bikinis?

Well, anyway, some Olympic beach volleyball players (there is no Olympic beach handball) do play in bikinis, and others, such as the Egyptian women's team, play in long sleeves, loose-fitting tops, full-length pant legs and hijabs to cover their heads.

While you're waiting to see men's beach volley- or hand-ball played in Speedos, you can always watch the men's diving competition, where the guys wear just about as little as possible. You're welcome.

So anyway, more reputable cartoonists than I (with more immediate deadlines) fell into the trap of conflating the European Handball Association with the International Olympic Committee, and beach handball with beach volleyball, and had to retract or revise their cartoons. I caught the mistake before going any further with the cartoon than a pencil sketch of one panel, so you will not see today's sketch become a finished cartoon.

Unless I can build a better gag around it someday.