Q Toon: Olympians, Out or Not 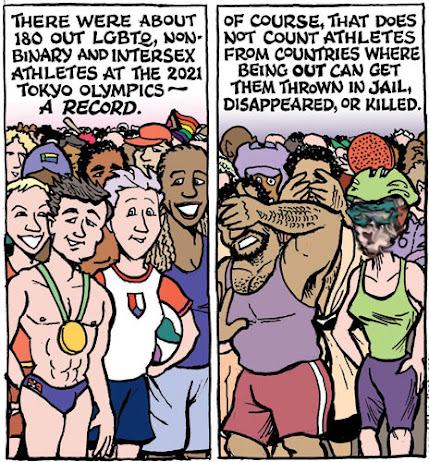 The list of out athletes competing at the Tokyo Olympics keeps growing. The first article I read about them knew of 168; by last weekend, the number was up to 180. (Some athletes who were out to their friends and families had never had a reason to come out to the rest of the world before the games.) Outsports, the authority on such things, knew of only 56 out athletes at the 2016 Rio games, and 23 at the 2012 London Olympics.

A nosy reporter drew condemnation during the Rio games by writing a racy story about tracking down LGBTQ athletes on Grindr, heedless of their outness or the safety of being out in their home countries. He didn't include their names in his story for Daily Beast, but wrote enough details about the athletes that others could identify some of them. Accordingly, any resemblance between the people in panels 2 and 3 of this week's cartoon and any persons living or dead is, as the legal saying goes, purely coincidental.

And to anyone left out of panel 1, my apologies for not managing to squeeze all 180+ of you in there.

Update: Someone has been at it again, outing Olympic athletes without their permission.

[Insider] discovered at least 10 Twitter posts and four TikTok videos, one of which was seen over 140,000 times and revealed 30 users’ full faces before the platforms removed them for violating community guidelines.

At least one male user reportedly signaled on his profile that he was from a country known for discriminating against LGBTQ people. (The posts have since been removed and could not be verified by Yahoo Life.)

Grindr later issued a statement condemning those who created the videos, acknowledging that they breached the app’s terms and conditions, which “prohibit them from publicly displaying, publishing, or otherwise distributing any content or information that are part of the Grindr services.”

In some of those countries, being LGBTQ is punishable by death.