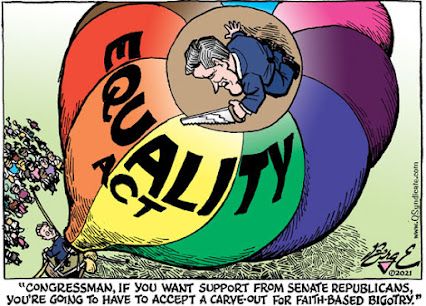 The House is expected to vote this week on the Equality Act sponsored by Rep. David Cicilline (D-RI), amending the 1964 Civil Rights Act to extend its protections to LGBTQ citizens. President Biden has vowed that signing it into law is one of the first priorities of his administration.
But first, it has to get through the U.S. Senate.
Requblicans object to the bill, claiming that it discriminates against religious people's belief in discriminating against LGBTQ people. They have also raised fears that men in sports will rush to transition to female in order to put women in sports at a competitive disadvantage, or at least to get into the ladies' locker room. And of course, everybody's bathrooms.
Democrats and Requblicans are evenly split in the Senate, and Vice President Kamala Harris could vote in the case of a tie. Senator Susan Collins (R-ME) was a co-sponsor of the Equality Act in 2019, in case you'd still like to get your unrealistic hopes up for her again. But there doesn't appear to be much likelihood of any other Requblicans supporting the bill; Lisa Murkowski (R-AK) and Rob Portman (R-OH) aren't making any promises, and Mitt Romney (R-UT) declared his opposition just last week.
Since, under current rules, any bill needs to have the support of 60 senators in order to get anywhere, Requblicans can filibuster the Equality Act without lifting a finger. Almost literally. We tend to think of a filibuster as involving some senator speaking for hours on end until he/she collapses from exhaustion. Nowadays, all it takes is 40 votes against a motion to close debate. Actual debate need not even follow.
There used to be a saying that the Senate was the saucer in which the overheated soup from the House was allowed to cool. Now the Senate is the arctic vortex that freezes the whole bowl of soup, a plate of lasagna, a bunch of bananas and the rest of the whole damned kitchen into an impenetrable block of ice.
Posted by Paul Berge at 2:25 AM