February on the Ones

I've used some of these Saturday posts to rehash my own cartoons from 30 years ago, which at this point in the calendar, has led up to Gulf War I. My problem this month is that I've already posted most of my February, 1991 cartoons for one reason or another. The cartoon below may very well be the only one previously unrehashed.

So for a theme this week, here are some of my Wisconsin-themed cartoons from 2001 and 2011.

This cartoon, drawn to accompany an editorial in the Business Journal, has a date written on it of February 16, but so does another Beej cartoon. I don't see a cartoon dated February 23, and I think this one is the one with the wrong date.

At any rate, Chuck Chvala (D-Madison) was the on-and-off Majority Leader in the Wisconsin State Senate from 1995 to 2002 — on at this point in time — and the Business Journal thought that a prescription drug bill in the state legislature was doomed and little more than a partisan ploy. Chvala ended up not looking so heroic when he was found guilty of violating campaign finance laws by having Democratic caucus staff do electioneering work on the state dime.

Now Chvala podcasts political punditry with former Assembly Speaker Scott Jensen (R-Waukesha), who had his own run-in with ethics laws. 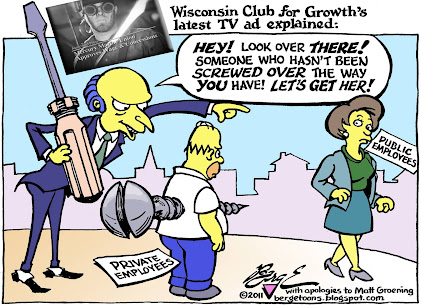 2011 was a tumultuous year in Wisconsin politics; Scott Walker took office as Governor with a Republican majority in both houses of the state legislature. Backed by an ad blitz from anti-union oligarchs, they launched an all-out assault against public employees (notably excepting the police and fire unions, the only unions to have backed Walker's campaign).

Wisconsin Club for [Cancerous] Growth took the lead in TV and radio advertising. One of their ads highlighted the wage and benefit cuts that unions at various private firms had been forced to swallow during the 2008-2009 economic crash, thanks to management's contempt for their own communities. Mercury Marine, for example, could threaten to close down its Fond du Lac plant and open shop in Bumm Fork, Alabama, instead; but the same can't be done with schools and snowplows, prisons and parole officers. So the voice-over announcer complained that public employee unions were not sharing in privately employed workers' pain:

"All across Wisconsin, people are making sacrifices to save their jobs: frozen wages, pay cuts and paying more for health care. But state workers haven't had to sacrifice; they pay next to nothing for their pensions and a fraction of their health care. It's not fair. Call your state legislators and tell them to vote for Gov. Scott Walker's budget repair bill. It's time state employees paid their fair share, just like the rest of us."

It was cute that the folks at Wisconsin Club for [Cancerous] Growth included themselves in "the rest of us." 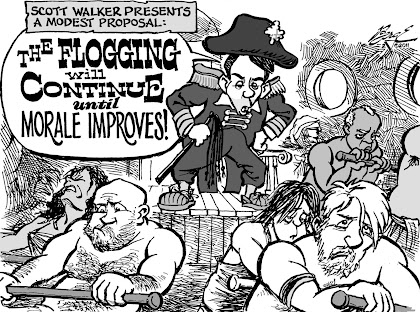 Act 10, as Walker's "budget repair bill" was officially called, gutted public employee unions' ability to negotiate salaries and benefits, banned those unions from collecting dues from public employees who chose not to belong to the union (but would continue to be included in whatever union contracts would follow). Having made union membership pointless, Act 10 also made mandatory annual recertification votes, further encouraging employees to bust their unions.

All in the name of fixing Republicans' "hole in the state budget." 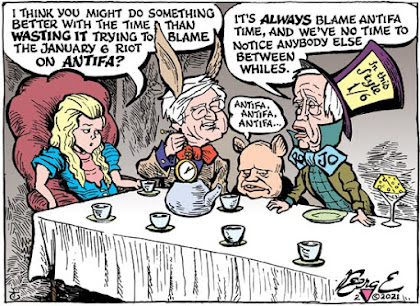 Well, folks, as appreciation for your indulgence while I wallow down memory lane today, here's a February, 2021 cartoon featuring three members of Wisconsin's illustrious delegation to Washington, D.C.: Congressmen Glenn Grothman and Scott Fitzgerald, and Senator Ron "This Didn't Seem Like an Armed Insurrection to Me" Johnson.