I just bought myself the fifth volume of the comprehensive collection of daily and Sunday "Pogo" comic strips by Walt Kelly. The foreword by Jake Tapper includes this non-Pogo strip Kelly drew in response to the Displaced Persons Act of 1948.


Refugees admitted to the United States under this program were also aided by voluntary social service agencies, accredited by the Displaced Person Commission. Most of these agencies were created by religious and ethnic groups, who gave assurances that the admitted refugees would not become “public charges” and that they, the agencies, would help oversee the resettlement of the refugees.

In spite of being a nation of immigrants, the U.S. has a long history of citizens convinced that immigration got out of hand once grandpa and grandma had stepped off the boat. 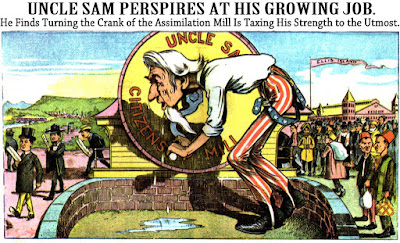 I don't have a cartoonist, publication, or date for this cartoon (credit Culver Pictures), but it probably dates from the fin de siècle, and quite possibly Judge magazine.
The cartoonists at Judge appear to have a long-standing animus against immigrants. The protagonist in Judge Art Editor Grant Hamilton's 1891 cartoon points at a horde of ne'er-do-wells labeled "German socialist," "Russian anarchist," "Polish vagabond," "Italian brigand," "English convict," and "Irish pauper,"  and tells Uncle Sam, "If Immigration was properly Restricted you would no longer be troubled with Anarchy, Socialism, the Mafia and such kindred evils!"
Another Judge cartoonist, Louis Dalrymple, portrays immigrants "direct from the slums of Europe" swarming ashore as so many rats. Italians figure rather prominently in this cartoon; so too does anarchist Leon Czolgosz, represented by the rat with the red bandanna and a dagger labeled "assassination" in its teeth. Looking through the clouds is the president he assassinated, William McKinley. (The real Czolgosz used a gun, but I guess the Socialist rat swiped it from him in this cartoon. To each according to his needs.)
Dalrymple returned to a maritime metaphor in 1903, widening his paranoia to a more inclusive array of national stereotypes. Now, I'm not saying his anti-immigrant preoccupation was itself a manifestation of mental disease or defect, but as it happens, Dalrymple died of paralytic dementia just two years later, aged 44. Let that be a warning to Stephen Miller.
Since this here blog has a thing about keeping track of what cartoonists were drawing 100 years ago, let's now skip ahead to 1919. A series of terrorist attacks by communist sympathizers began with several explosive devices mailed to prominent Americans, including Attorney General A. Mitchell Palmer and billionaire John D. Rockefeller, intended to be delivered on May Day. A few arrived early and others were not delivered due to insufficient postage. One delivered to a senator from Georgia did explode, injuring his wife; another delivered to the mayor of Seattle was a dud. The rest were intercepted before anyone was hurt.
If you want something done right, you have to do it yourself. Bombers delivered explosive devices themselves in eight U.S. cities shortly after midnight on June 2, including at the homes of Attorney General Palmer, of judges in New York City, Pittsburgh and Boston, of a Massachusetts congressman, and of the mayor of Cleveland. The Church of Our Lady of Victory in Philadelphia was another target. Two were killed in the New York bombing, one of them reportedly the bomber himself.
Residual panic over bombings of military and port facilities by German sympathizers during the war easily shifted to red hysteria, especially since communism was associated not only with Russians, but with Germans — especially German-American academics and socialists in elected office.
Many cartoonists were able to express their condemnation of the bombers without painting immigrants with the same brush, pen or charcoal. But for many Americans, it was taken for granted that immigrants were behind the violence and that sending them back to Europe was the obvious solution — a sentiment the Ku Klux Klan would be able to exploit in the decade to come.
But let us step back another 50 years to close with a more hopeful "Can't we all just get along?" sentiment, from German-American immigrant Thomas Nast.
Why, he even allowed the Irish guy a seat at the table!
Posted by Paul Berge at 4:09 AM