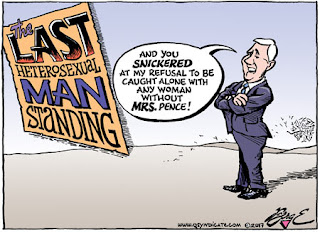 Adding Matt Lauer and Garrison Keillor to the list of disgraced sexual shenanigangsters, I believe we're getting dangerously close to witnessing any more allegations just becoming so much background noise.

Either that, or unless women suddenly decide to adopt the chador or habit as everyday dress, men are going to be forced to wear thick woolen mittens at all times. And pants which sound an alarm whenever dropped below the waist.

No, I'm pretty sure this will all blow over and everything will go back to status quo ante.

You don't think so?

I caught part of the Mark Twain Prize for American Humor celebration of David Letterman on PBS last week. Senator Al Franken had been the first presenter in the ceremony, but because of the recent accusations against him of sexually improper behavior, the telecast edited out his appearance and the part of Letterman's acceptance speech in which he paid tribute to Franken. Franken is also missing from the list on the Kennedy Center's web site of the evening's featured speakers.

I couldn't help thinking how ironic it was that Letterman was publicly humiliated by a sexual impropriety scandal of his own only eight years ago.
Posted by Paul Berge at 9:13 AM