The cartoon I published a couple weeks ago of Cthulhu drowning his sorrows in a beer appears to have caught on — at least moreso than most of my work. I had a request from the Independent Voter Network to use it, which I referred to my distributor at Q Syndicate since it was a current cartoon (and it did show up at ivn.us on Hallowe'en).

It showed up on my Facebook feed, as an October 26 post from someone unfamiliar to me that had subsequently been shared by someone on my friends list — and, as it turns out, by at least 2,975 other people. 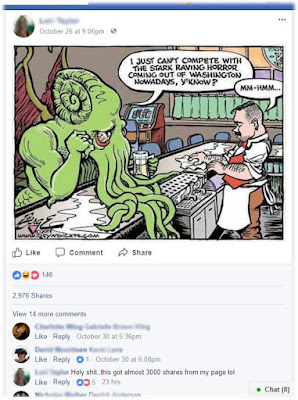 That's a couple thousand more friends than I have, and it prompted me to do a quick Google search. I found the cartoon in the usual places: my own site, the AAEC page, subscribing publications, political message boards and such.

And one surprise: The Times Dispatch of Lawrence County, Arkansas.
Lawrence County is in the northeast corner of the Toothpick State, with a population of about 17,000. It is home to Williams Baptist College in Walnut Ridge, a town whose official web page boasts that "Residents can enjoy the rural charm of a farming community with its winding roads and fields farmed for generations." County residents voted 72% to 22% for Donald Trump over Hillary Clinton last year.

In short, not the typical publication to carry a gay left-wing cartoonist from Wisconsin.

But then, this cartoon wasn't skewering any particular politician by name, so I haven't had a flood of messages about how I'm a biased librul godless pervert heathen headed straight for aitch-ee-double-Toothpick State.

Some people do pick up on my original intent, though. Some guy objected to the cartoon on the Independent Voter Network's Facebook page, complaining, "Where were these cartoons when the Muslim Obama was in office! Independent??? Just a closet democrat!" So there's still time for the good citizens of Lawrence County to get their dander up.
Posted by Paul Berge at 6:00 AM

Email ThisBlogThis!Share to TwitterShare to FacebookShare to Pinterest
Labels: Arkansas