Condemned to Repeat It

Trump's address to the nation on Monday night, in which he sort of announced that he was going to do something about the war in Afghanistan. He didn't say he was sending more troops (although he is doing exactly that); mostly he talked about what he would not do. "One way or another," he promised, "these problems will be solved."

Most pointedly, he would not set any date by which the U.S. would turn responsibility for the fighting over to the Afghans. 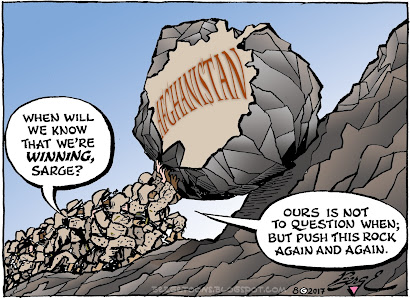 I'm reminded of a cartoon I drew back in 2008. The George W. Bush administration had steadfastly refused to offer a timetable to withdraw troops from his war in Iraq. Saddam Hussein had been quickly deposed, but extinguishing the insurgency was proving considerably more difficult. In the summer of 2008, Bush announced a "time horizon" for the end of U.S. troop involvement.


“In the area of security cooperation, the President and the Prime Minister agreed that improving conditions should allow for the agreements now under negotiation to include a general time horizon for meeting aspirational goals–such as the resumption of Iraqi security control in their cities and provinces and the further reduction of U.S. combat forces from Iraq.” 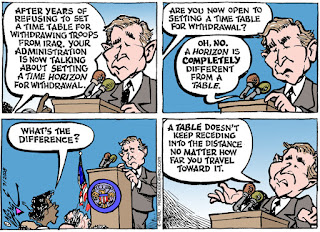 According to NPR, an unnamed senior U.S. official — which usually means cabinet-level — was reminded of another war from the past-as-prologue:


When asked before [Trump's] speech how long the U.S. presence could remain in Afghanistan, a senior U.S. official responded, rhetorically, "How long have we been in Korea?"