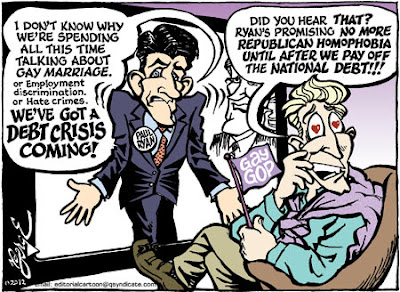 As I've noted before, part of the reason that I've drawn so few cartoons about Congressman Paul Ryan is that I draw cartoons for Q Syndicate, which distributes material to LGBT newspapers around the United States, and Mr. Ryan has had very little to say on LGBT issues. When asked, as he was on Meet the Press last February, he changes the subject to something of greater interest to himself.


“I support the Wisconsin amendment to define marriage between a man and a woman … I don’t know why we are spending all this time talking about this. We’ve got a debt crisis coming and the administration just gave us a budget that simply just charts another path to debt and decline.”

Being a 21st Century Republican, he doesn't have to spend any time thinking about defining marriage, or any other issue -- whether it's the Employment Non-Discrimination Act, hate crimes, adoption rights of same-sex couples, ending Don't Ask-Don't Tell, the Patriot Act, the Lily Ledbetter Fair Pay Act, criminalizing birth control, subsidizing Big Oil,  starting an unfunded war in Iraq, or creating an unfunded Medicare Part D.  He goes on autopilot and votes in lockstep with everyone else in his party, saving his precious intellect for that looming debt crisis.
Posted by Paul Berge at 7:37 AM