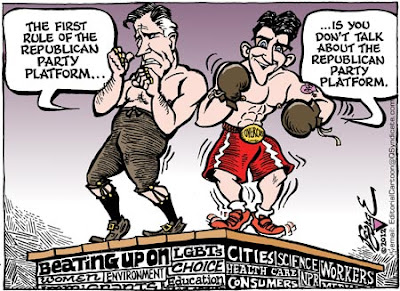 It was somewhat annoying that my cartoon schedule last week caused me to miss the biggest story leading up to the Republican Party convention: Missouri Rep. Todd Akin's insight into the workings of the female reproductive system and its miraculous ability to shut completely down during "legitimate rape." Not exactly an LGBT issue per se, but it was dominating the national conversation in a way that Geraldo Rivera's offhand comment about a lesbian cabal taking over the Department of Homeland Security wasn't.

With the party convention underway and a hurricane bearing down on the Gulf Coast this week, media attention has wandered on, so the GOP War on Women is reduced to a pair of planks among several in the platform in this week's cartoon. Mr. Akin may not be welcome at the convention, but his opposition to abortion, even in cases of rape, incest, threat to the life of the mother, or even ectopic pregnancy is right there in the platform.

If Mr. Romney had any core convictions of his own, we might be excused for ignoring his party platform. But since the current incarnation of Candidate Romney is turned 180 degrees away from Senatorial Candidate Romney -- to say nothing of Candidate Romney's promise to repeal the national health care reforms that were modeled after the Massachusetts plan Governor Romney was overtly proud to sign into law -- the platform is only clue we have as to what to expect from President Romney.

Well, that was Massachusetts, Mr. Romney's apologists tell us. He had to deal with a liberal electorate and a Democratic legislature. He couldn't very well hold out for the style of government he really, truly believes in.

If the American people who aren't turned away from the polls on November 6 elect Mr. Romney President, it is virtually certain that they will elect a Republican House and Senate as well. I have no confidence whatsoever that Mr. Romney has the disposition to, or capability of, standing up to the radical right-wing zealots who are responsible for the content of the Republican Party platform.
Posted by Paul Berge at 3:11 PM