When the American Foundation for Equal Rights announced that it would challenge the anti-marriage amendment to California's state constitution approved by the voters in November, mainstream LGBT rights organizations said it was too soon to go to the courts. They had been defeated in the state supreme court before the election, and again in the election itself. Since the AFER suit is proceeding anyway, those mainstream organizations have offered their assistance, but those offers are getting a chilly response. 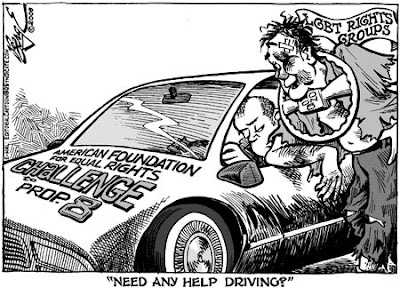 It's hard to know whose side to be on in this kerfuffle. A quixotic attempt to refight a lost battle might do more harm than good, but what point is counseling patience while real families are being hurt? I'm reminded of a classic Feiffer cartoon: six panels show basically the same cartoon updated from 1865 to 1965, supposedly drawn by cartoonists counseling patience on Blacks' civil rights -- activists pushing for real change are represented in the cartoons-within-the-cartoon as a radical individual doing damage to his own cause.

The point of the Feiffer cartoon, of course, is that no progress comes of patience. So lead, follow, or get out of the way; just don't bleed on the car, please.
Posted by Paul Berge at 8:20 AM