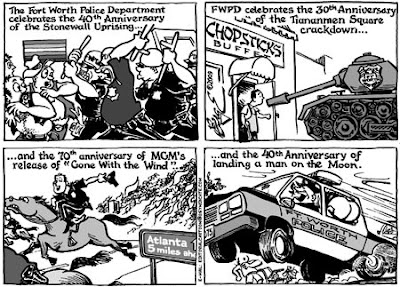 On the 40th anniversary of the bar raid at the Stonewall Inn, Fort Worth Police investigated the week-old Rainbow Lounge and reportedly found that patrons were drinking in the establishment. In the course of the police making arrests for disorderly conduct, one patron had to be hospitalized for a serious head injury.

Since then, the chief of Fort Worth Police Department, also pretty new to the job, has been in full damage control and apology mode, so at least that counts for some progress since 1969.
Posted by Paul Berge at 6:16 AM