Q Toon: All He Wants for Christmas 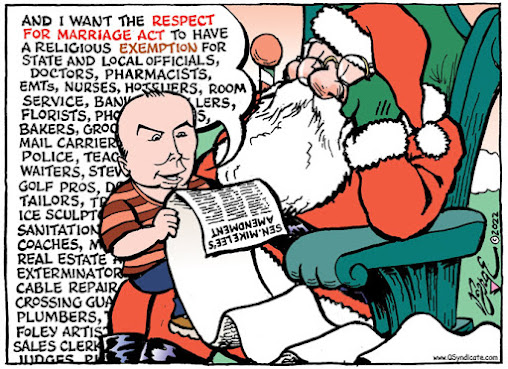 The Respect for Marriage Act passed the U.S. Senate on Tuesday by a vote of  61 to 36. The Act, protecting same-sex and interracial marriages from being nullified by today's activist Supreme Court, won the support of twelve Republicans and all 49 of the Democrats present. (Sen. Rafael Warnock was home in Georgia campaigning in next week's run-off election. Two Republicans also did not vote.)
The bill now returns to the House, which passed it months ago but will need to reconcile with some differences between their version of the bill and the Senate's.
You may have thought that marriage equality was a settled issue. But you're not Supreme Court Justice Clarence Thomas.

Thomas’s opinion set off alarm bells among proponents of marriage equality, who pointed out that if the Supreme Court were to overturn Obergefell, as it did Roe, then the right to same-sex marriage would similarly fall to the states. Currently 35 states have statutes or constitutional amendments banning same-sex marriage that would go into effect if Obergefell were overturned, according to the Movement Advancement Project, a nonprofit that advocates for LGBTQ equality.

So Senator Tammy Baldwin put together a bill that will require that even if the Supremes reverse Obergefell, if a same-sex or interracial couple were legally married in one state, their marriage doesn't magically disappear any time they happen to be in one of those 35 states.

In order to garner bipartisan support, the Senate version of the bill already had religious liberty guarantees. Baptist homeless shelters can still put lesbian couples back out on the street. Islamic food pantries can still refuse to admit gay couples. Ku Klux Kathedrals can still preach against miscegenation. Heck, if they want to, Catholic adoption agencies can still discriminate against legally married couples when one of them has been divorced.

But that wasn't enough for the 38 Senate Republicans who voted against the bill. Utah's Mike Lee was one of several Republicans arguing that antigay laypersons ought to be able to discriminate against same-sex and interracial couples, too, even in a completely secular capacity.

Who else is going to stand up for the rights of the Kim Davises of the world who think God is telling them to treat someone else's marriage as if it doesn't exist?

Requiring the state to recognize your marriage doesn't mean much if the people in charge can just make a cross with their fingers at you and now pronounce you single and stranger.

Fortunately, Lee's amendment, and the other poison pills were voted down. Yet I suspect they signal to Clarence Thomas and the others of his ilk how to argue that the Respect for Marriage Act is unconstitutional.