1917 was an awfully eventful year, as years go, so it's hardly surprising that 1918 got off to a running start. Well, not so much on the battlefield; an Entente Powers victory here was countered by a Central Powers victory there, and the fight along the Western Front was accomplishing very little other than sending young men home in boxes. Exit Romania. Enter Brazil.

This is the context in which President Woodrow Wilson introduced his "Fourteen Points" in a speech on January 8, 1918. Viewing the complex system of bilateral alliances compelling one nation after another to commit to a war that really should have been a matter between Austria and Serbia alone, Wilson proposed "open covenants of peace" in place of "private international understandings," and establishment of a "general association of nations" for the resolution of international disputes.
Other points prescribed freedom of the seas, an end to German occupation of Belgium, redrawing of European boundaries based on ethnicity of population, and creation of independent states for Poland and non-Turkish territories of the Ottoman Empire.
Support for Wilson's proposals was nearly unanimous in the American press, as reflected in these editorial cartoons.
Notably absent from the 14 Points is any insistence on a change in the governments of the Central Powers. According to a map of Wilson's proposals published in the Houston Post on January 14, the only significant loss Germany would suffer would be the region of Alsace-Lorraine. Austria-Hungary would cede Trentino and Istria to Italy; otherwise, this mapmaker didn't venture a guess how the empire would be broken up. (Also unaccounted for on this map are promises of a "free and secure access to the sea" for Serbia in Point XI.) 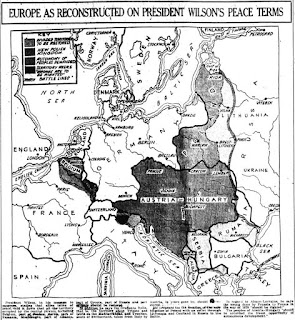 In the end, English and French demands at war's end resulted in much harsher terms for Germany, both in terms of territory and reparations, than Wilson envisioned. Nevertheless, at Wilson's death in February of 1924, Munich cartoonist Thomas Theodor Heine blamed his country's troubles on the late President and his 14 Points (here represented by fourteen beads on a fishhook):
A major concern for the U.S., Great Britain and France were the on-going peace negotiations between the Central Powers and Russia.

Although the above map imagines significant losses to Russia of its western territories, the longest of the Fourteen Points extends several promises to Russia in hopes of derailing the peace negotiations in Brest-Litovsk, in present Belarus.


VI. The evacuation of all Russian territory and such a settlement of all questions affecting Russia as will secure the best and freest cooperation of the other nations of the world in obtaining for her an unhampered and unembarrassed opportunity for the independent determination of her own political development and national policy and assure her of a sincere welcome into the society of free nations under institutions of her own choosing; and, more than a welcome, assistance also of every kind that she may need and may herself desire. The treatment accorded Russia by her sister nations in the months to come will be the acid test of their good will, of their comprehension of her needs as distinguished from their own interests, and of their intelligent and unselfish sympathy.

When the Russian Bolshevik government discovered that Germany and Austria expected the Brest-Litovsk treaty to take Poland and the Baltic states away from Russia, negotiations toward the treaty were stalled.
But with the Russian army in near total disarray and newly autonomous Ukraine offering badly needed grain to Vienna (negating what little leverage Russia had at Brest), Lenin and Trotsky found that they were in a hopeless negotiating position.
Wilson, for his part, offered the hope of American reinforcements to the Russian Army if Russia would just remain in the war, but there simply was no practical way of getting U.S. military men and materiel through to the Eastern Front.
In the end, no amount of Allied threats, promises or cajoling would prevent Lenin's government from agreeing to a peace treaty on Germany's terms.
(In case you missed it earlier, Japan was on the Allies' side during this one.)