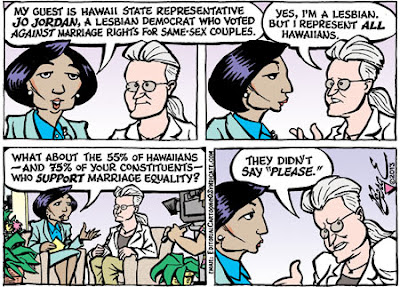 Hawaii State Representative Georgette "Jo" Jordan provides a curious sidebar to her state's passage of marriage equality this week. A lesbian who is "not part of any faith-based group," Jordan was appointed to the state legislature in 2011. When Governor Abercrombie called a special session to consider marriage equality, LGBT groups such as Equality Hawaii wanted her to be the face of the bill.

But Jordan decided that she did not want to be pigeon-holed as a representative of her state's lesbian and gay citizens. In an interview with Honolulu Magazine, she says,


"I know who I am, I’m grounded in who I am, I’ve never hid who I am. And when I walked in this door, the GLBT community came knocking on my door and they said, "We’re so glad you’re here. Come on in here." And I’m like, 'I’m Jo, I’m a legislator, those are my hats first.'
"I know what it meant to step in this room for a kid from Waianae, who graduated from public school, who has no background, to be a female and to be GLBT on top of that. And I didn’t want to come up the gate saying, "Look at me, here I am." Because it would distract from anything that I worked on. I have never waved my flag. I don’t wear it across my chest."

So determined was she not to be type-cast, that she proceeded to vote against marriage equality. Her claim is that there aren't strong enough provisions in the bill to allow people to discriminate against same-sex couples if they want to. Apparently, she was swayed by the "citizen's filibuster," in which 5,184 right-wing religious folks showed up to testify against the bill, repeating the same tropes over and over as long as they possibly could. Jordan found them to be nice people, unlike the people over at Equality Hawaii who felt betrayed and let her know it.


"I totally thought I was going to get blasted by the religious community. When I walked into the hearings, I was like, those faith-based guys are going to come out. And not one of them said anything. They were more about, 'Thank you, thank you for listening.' And they didn’t know who I was. Outside, I was Rep. Jordan sitting at the table. They had no idea who I was, or my lifestyle, and that’s why I like it. Can we get to know each other before you know the rest of the stuff?
"I was blasted by the GLBT community on Saturday, outside the door. That took me aback. At the time, I hadn’t stated my position, and I was still undecided. These were testifiers the day before, saying, 'How can you be undecided? You should be a 'yes.' Do you know what this means?' And I politely engaged with them: 'I have some problems with SB1.' I explained the issues and they slammed me again. 'It’s good. Just vote yes.' They started getting boisterous. My natural instinct is, I’m going to fly some words at you. But you can’t, so I’m like, 'Thank you.'"

If Think Progres's figures on support for marriage equality in Hawaii and in Jordan's district are correct, come next election, her constituents may be like, "See you."
Posted by Paul Berge at 7:56 AM