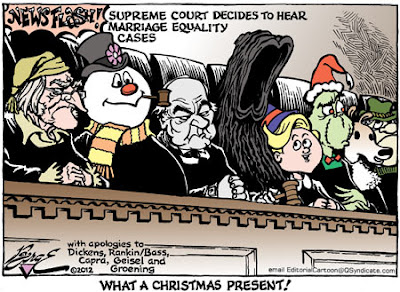 It's customary among editorial cartoonists when stealing borrowing other cartoonists' creations to credit the other cartoonists with "apologies to..." or a similar note. We're not usually so assiduous about apologizing to film makers or 19th Century authors -- think of any of the myriad cartoons that use whatever current movie is out to draw some parallel to political or social events (my own from last week, for example). But it would have seemed discriminatory to have left Charles Dickens and Frank Capra out of this week's credits, so in they go.

Besides, I wasn't confident that everyone would recognize Mr. Potter.
Posted by Paul Berge at 11:41 AM