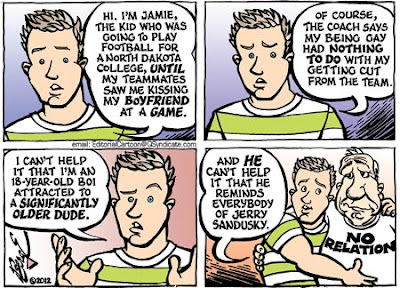 I had discounted this story as fodder for an editorial cartoon when I first read it -- too obscure, I thought. Besides, I'd just drawn about football last week. But I reconsidered the story when it popped up in the Saturday Night Live Update, and when there seemed to be no other LGBT story out there other than the one I'd just drawn about.


"A freshman at a two-year college in North Dakota is saying he was kicked off the football team because he is gay. However, North Dakota State College of Science football coach Chuck Parsons is saying linebacker Jamie Kuntz was dismissed from the team for lying. A teammate saw Kuntz kissing his older boyfriend in the press box at a game in Pueblo, Colo.

"The teammate reported the kiss to the team's coaches. Football coach Chuck Parsons confronted Kuntz on the bus ride back to Wahpeton, N.D. and Kuntz told his coach the man he kissed was his grandfather. Kuntz's boyfriend is 65 years old."

Now off the team, Jamie dropped out of college as well, telling SB Nation that he didn't see any point in going to NDSCS if he couldn't play football. I hope he has something else planned for his future, and I don't mean following Anna Nicole Smith's career path.

It would have been only too precious if the North Dakota college's football team were the NDSCS Cougars. Actually, they're the Wildcats. My mistake.
Posted by Paul Berge at 12:53 PM