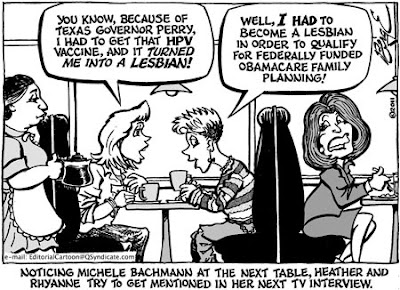 This week should, I suppose, have been time for a cartoon about the end at long last of "Don't Ask, Don't Tell," had I been confident enough that there wouldn't be some last second maneuver from out of the blue to stop its repeal. Happily, the transition to equal opportunity in the military has been achieved smoothly and without a hitch -- which doesn't make for a particularly funny cartoon, but perhaps Chuck Asay or Michael Ramirez will draw some cartoon heralding the End Times that will inspire a cartoon next week.

So here instead is another Michele Bachmann cartoon. In case you missed it, Bachmann claimed in a TV interview that some woman at a campaign appearance had told her that the woman's daughter had been given the vaccine to prevent the cancer-causing Human Papillomavirus, and the daughter had subsequently become mentally retarded. Medical authorities swiftly condemned Bachmann's claim, and Bachmann retreated slightly by saying that she was just repeating what some anonymous woman had told her. (But in these days when everybody and their dog has a Facebook page, a Twitter account, and a blog, don't you think someone would have already found some trace of this phantom mother by now?)

Meanwhile, it looks like Bachmann is Last Month's Flavor of the Month, so I'm now working on my Rick Perry caricature. Tune in again tomorrow for my first attempt.
Posted by Paul Berge at 8:04 AM